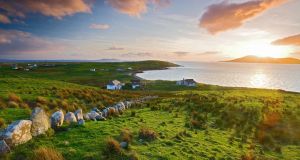 Mr O‘Toole claims the cable’s route is through sensitive fishing grounds in Clew Bay, containing habitats of protected endangered species including the bottle nosed dolphin and the Brent goose.

A Clare Island fisherman has won the first leg of his High Court battle over the laying of fibre optic cable off the Mayo coast because a decision granting a licence for the works is to be quashed.

The Irish spur of the multi million euro international communications project, involving a transatlantic cable system connecting northern Europe and the US, is now on hold while the issue of whether to grant another foreshore licence is further considered.

Teams had been on standby and in isolation in Co Mayo waiting to start work on the Irish section of the subsea cable system. The Irish section, known as America Europe Connect 2, is owned by a consortium of IT companies including internet giants Facebook and Google.

James O’Toole, from Clare Island, had earlier this month initiated his challenge over the granting of the licence. The consortium was a notice party to his proceedings against the Minister of State at the Department of Planning and Local Government, which granted a foreshore licence earlier this year.

On Friday, Mr Justice Denis McDonald was told during a remote hearing there had been a “dramatic development” in the case. James Devlin SC, for Mr O’Toole, said a letter on Thursday evening from the Chief State Solicitor indicated the Minister was consenting to an order quashing the decision of February 6th 2020 to grant a licence to America Europe Connect 2 Limited (AECL) to install the cable on the foreshore off Old Head, Louisburgh, Co Mayo.

While his side did not object to the matter being remitted to the Minister for reconsideration, any further consideration would require public participation and an environmental impact study, counsel said.

David Holland SC, for AECL, asked that the case be adjourned for two weeks. “We understand that this licence has a death sentence and a sentence of remittal,” counsel said. The consortium had already given an undertaking not to start works off the Mayo coast, he added.

Mr Justice McDonald, who had been due to hear an application for a stay on the works off the Mayo coast, said the sides should agree the terms of the order quashing the licence decision. He also said an undertaking by AECL that no works be carried out should continue until the matter is next back in court on June 5th. This was not a reflection on the good character of AECL, he added.

The court previously heard the international project is for construction of a transatlantic fibre optic cable extending from the US to Denmark with spurs to Ireland and Norway. The proposed route for the Irish spur includes a landfall at Old Head on the southern side of Clew Bay, over three kms from Louisburgh, and AECL had secured the foreshore licence to lay the cable coming ashore at Old Head.

In his action, Mr O‘Toole claims the shortest possible route to Ireland’s shore was selected even though it is through areas of very rocky seabed where the cable cannot be buried. He said the route is also through sensitive fishing grounds in Clew Bay and the narrow channel between Achill and Clare islands, containing habitats of protected endangered species including the bottle nosed dolphin and the Brent goose.

1 In six months we will be in the grip of a 1980s-style recession
2 Angela Merkel sweeps in to save the euro zone
3 Brother is dragging his heels as executor of uncle’s will - is there anything I can do?
4 Stocktake: Has Warren Buffett lost the magic touch?
5 Property price drop of up to 12% this year a ‘reasonable’ assumption – McDonagh
Real news has value SUBSCRIBE