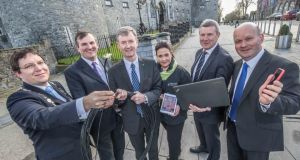 Businesses that want proper high-speed, fibre-optic broadband networks in their town or city need to get lobbying if they want it to be chosen, according to Conal Henry, chief executive with eNet.

He was speaking as construction began on a new €500,000 superfast “fibre direct” broadband infrastructure in Kilkenny city. The network is expected to be finished by the end of June. On completion, local businesses will be able to access broadband speeds of up to 250Mbp (megabytes per second) directly, rather than connecting to a local telecoms exchange or cabinet.

Enet, which is also running similar pilot projects in Claremorris, Loughrea and Ardee, is deciding which towns and cities it will choose for phase II of the project to roll out fibre networks across the country, which will begin next year.

Enet manages the metropolitan area networks, which bring high-speed broadband connections to cities and towns around the State and connect 94 regional cities and towns. The firm has invested €2.5 million in its fibre-direct project so far with funding provided by the European Investment Bank (EIB). The bank is promising €12 million to build fibre-broadband infrastructures in up to 25 areas.

Mr Henry said that Enet needed more than 100 businesses to sign up for fibre-based broadband services on its network in Kilkenny and that a similar number of subscribers were needed in any town or city it builds infrastructure.

“The principal thing we’re looking for when deciding where to establish networks is a significant level of local activism.

“We need the local business community to convince us that the interest is there before we can proceed.”