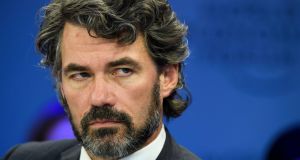 Gavin Patterson: The chief executive of the BT Group said he was disappointed by BT Italia’s falsified accounts, which he called a “very complex set of manipulations”. Photograph: EPA/Gian Ehrenzeller

When BT first admitted to “certain historical accounting errors” in its Italian operation last October, the City shrugged it off as nothing more than a little local difficulty.

After all, the telecoms giant said its overall profits for the year would be unaffected by what it termed “inappropriate management behaviour” in Italy. Nor would there be any material impact on previous years.

The £145 million (€168 million) write-down required for BT Italia, while unwelcome, was little more than loose change for a business of this size.

In any case, if investors really wanted to worry, there were far bigger problems to fret about. These include the group’s huge debt (almost £10 billion after last year’s £12.5 billion takeover of mobile operator EE), its ballooning pension deficit (also approaching £10 billion), and its long-running wrangle with regulators over the separation of its Openreach operation, which runs the UK’s ageing telephone and broadband network.

Now, however, it seems the Italian accounting scandal is far deeper than first thought, with the £145 million hole in the accounts rocketing to £530 million (€614 million).

That’s certainly more than a little local difficulty, but still not large enough, surely, to warrant a 21 per cent plunge in BT’s share price? Amid a huge volume of trading, almost £8 billion was wiped from the group’s stock market value in one of the biggest single-day declines ever suffered by a FTSE 100 company.

Behind the savage market reaction was a warning from chief executive Gavin Patterson that accompanied the Italian update: Business is slowing in BT’s core UK market as government and corporate customers cut spending in the wake of the Brexit vote and global economic slowdown.

As a consequence, operating profits for the current year are forecast at around £7.6 billion instead of the £7.9 billion previously expected. Profits for next year will take a hit as well, said Patterson, who had previously indicated his hope that Brexit would have only a limited affect on the group’s business.

A whistleblower first drew attention to what was going on at BT Italia, but the scale and complexity of the wrongdoing seems to have been as much of a shock to management as it was to the City.

That in turn has heightened fears over the general standard of corporate governance at the group, which says it is now reviewing financial controls across its operations.

Patterson, who said he was “deeply disappointed” with what had been uncovered, appears confident that Italy is an isolated incident. The falsified accounts had been a “very complex set of manipulations” he said, involving a large number of people over a number of years.

Heads have rolled at the Italian business, and prosecutors in Milan are also reported to have launched an investigation into alleged false accounting and embezzlement. It remains unclear how such dodgy accounting practices could have gone undetected for so long, either in Italy or at BT’s London headquarters.

Although BT has promised it will maintain its policy of lifting the dividend by 10per cent over the next two years, the plunge in the price is particularly galling for the company’s army of small investors, who had already seen their shares lose a fifth of their value last year.

Hundreds of thousands are affected. BT was among the first in the wave of privatisations under the 1980s Margaret Thatcher government. When it floated in 1984, it was the world’s biggest-ever share offering. Of the 827,000 investors on its books, some 700,000 have holdings of 1,600 shares or less.

There’s a more recent shareholder who won’t be too happy either: former joint owner of EE, Deutsche Telekom. It swapped its interest in EE for BT shares in last year’s takeover and is now the group’s largest single shareholder, with a stake of 12 per cent.

Some pain could be coming Patterson’s way as well. BT said its remuneration committee will examine bonuses awarded to the chief executive and other senior executives, raising the prospect of payments being clawed back if performance targets are missed.

Last year Patterson’s pay package included a bonus of just over £1 million and £3 million worth of shares.

BT will remain in the City spotlight this week as it is scheduled to publish its third quarter results on Friday. Italy will be top of the agenda, but investors will also be clamouring for some reassurance on the problems they already knew about – from the pension deficit and debt mountain to the group’s wrangles with the regulators.