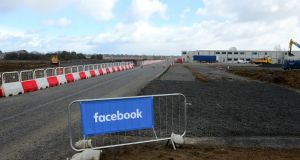 The site of Facebook’s data storage facility in Co Meath which will be its second in Europe. It will employ 115 when complete. Photograph: Ciara Wilkinson

Facebook’s data centre currently under construction in Co Meath will be “online late 2017/early 2018” and will employ in the region of 115 people when fully operational.

It has also emerged that Brookfield Renewable Energy Partners, the Canadian fund that bought the windfarms division of Bord Gáis, will power the site with wind energy produced in Ireland.

Brookfield has signed a 10-year supply contract with Facebook, which will power the data centre solely on renewable power. Brookfield will also supply wind power to Facebook’s European headquarters in Dublin.

The Irish Wind Energy Association highlighted a similar decision by Apple to power its new data centre in Galway with wind power, and said such deals are a “practical road map” for other big corporations to follow.

Tom Furlong, the vice-president of Infrastructure at Facebook, yesterday confirmed the company’s growth means it is also proceeding with plans to build the second of three buildings on the site earlier than anticipated.

1 Boris Johnson's new immigration regime will damage much more than industry
2 Bank leaked my loan request to family who tried to rip me off
3 Mastercard to create 1,200 new jobs by expanding base in Dublin
4 Google completes purchase of Treasury Building for €120m
5 Garda mobile contract win causes concern over Eir’s use of Huawei kit
Real news has value SUBSCRIBE