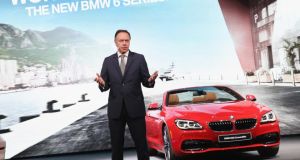 BMW has warned that technology companies and advertisers are putting increasing pressure on carmakers to surrender data collected by connected cars, underlining the fine line being taken by the automotive industry between functionality and privacy.

Ian Robertson, the German manufacturer’s board member for sales and marketing, said every car rolling off its production lines now offered some form of wireless connectivity – which can yield information about location, speed, acceleration, even the occupants of the car.

“There’s plenty of people out there saying, ‘Give us all the data you’ve got and we can tell you what we can do with it’,” he said on the sidelines of the Detroit motor show, adding that this included “Silicon Valley” companies, as well as advertising groups. “And we’re saying, ‘No thank you’.”

About two-thirds of cars now come kitted out with sensors and communications systems that can send and receive data. Much of the technology is aimed at increasing safety through so-called advanced driver assistance mechanisms – semi-autonomous features – or offering sophisticated in-car infotainment systems.

These telematics devices offer huge potential for carmakers, who will be able to find out more about how drivers use their cars, but also insurers and advertisers, who will be better able to size up their customers. BMW said it put a robust firewall in place to protect crucial data about the internal running of the car. But any transmission of data raises concerns about who might be able to access that information – and what they might do with it.

Adam Jonas, analyst at Morgan Stanley, said it was a “major issue” for carmakers. “Auto companies almost unanimously want to create a barrier on this information,” he said. “They don’t want to be the first one to let [their] guard down on information privacy or to become [the] first company to have a car hacked with bad consequences and image.”

Ford was forced into an embarrassing retraction at last year’s Consumer Electronics Show after Jim Farley, then head of marketing at the US carmaker, said: “We know everyone who breaks the law. We know exactly when you do it because we have a GPS sensor in your car.” He later clarified Ford did not track anyone without their permission.

The dawn of social media and big data has created a heightened awareness of privacy issues among consumers. Still, most drivers would be surprised by the scale and granularity of the data collected by modern vehicles. In a sinister illustration of the potential data that could be sacrificed by carmakers, Mr Robertson said BMW knew whether a child was in the car, based on weight sensors in the seats that linked up with the airbag system.

“Several companies have said, ‘We’d like to know that data because then we will know whether it’s an adult or a child sitting in the car’,” said Mr Robertson. “ ‘If you also tell us how long the engine’s been running, then we know . . . from the navigation system, they’re about to pass a McDonald’s, the car’s been running for three hours, and the child’s probably hungry.’” – Copyright The Financial Times Limited 2015

1 Basic income for all: Has the Covid crisis given us a new economic model?
2 Only way is up for Stripe as valuation skyrockets
3 ‘I don’t need to do any of this. . .I don’t actually need to work.’
4 Brexit stumbling blocks persist as Barnier travels to London
5 Unilever’s Dutch and British arms merge after 90 years ahead of Brexit
Real news has value SUBSCRIBE