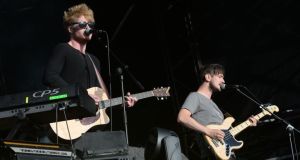 “When I look back over the years and think about bands like Little Green Cars, Kodeline (above) and the Script, who are all doing so well, it’s great to think we had them before anyone else,” said BalconyTV co-founder Stephen O’Regan. Photograph: Brenda Fitzsimons


BalconyTV, an online music channel featuring artists playing on balconies around the world, has been sold to the Orchard, a New York based distributor for independent musicians.

The Irish company was founded by three friends Stephen O’Regan, Tom Millett and Pauline Freeman in June 2006. Videos uploaded by BalconyTV have been watched 50 million times, with 10 million views in the last 12 months.

“It was just me, my laptop and some friends for a long time,” Mr O’Regan said, but gradually the company built up its presence from Dublin into other cities including London, Barcelona, Tel Aviv, Johannesburg, New York and Melbourne.

Last year, BalconyTV received $750,000 from Polaris Venture Partners, Lerer Ventures and Greycroft Partners. It has also been supported by Enterprise Ireland. On average, musicians on BalconyTV attract just 5,000 views but its biggest hits can reach millions. Mr O’Regan said he could not comment on the terms of the deal.

“My goal was always to get this on the right footing. People have been looked after. No one is complaining,” he explained.


Orchard opportunity
“This is about investment in the future and that’s what I was really looking for. We needed more resources to be able to run a global international music network. Orchard will give us the support we need in terms of development and design.”

Mr O’Regan said he had moved to New York to work for the Orchard who will retain the BalconyTV brand.

“When I look back over the years and think about bands like Little Green Cars, Kodeline and the Script, who are all doing so well, it’s great to think we had them before anyone else,” he said. “My father, Hugh O’Regan, helped out a little bit as did other entrepreneurs like Conor Stanley. ”

Mr O’Regan’s late father was a ground-breaking publican and developer. “We thought when we started we’d be the next Facebook. It has been an incredible learning curve . . .”

Sony Music Entertainment is a strategic investor in the Orchard, which was founded in 1997 to distribute independent music. The Orchard operates in 25 countries.