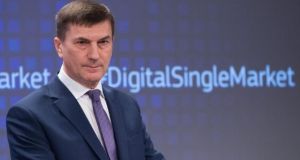 Andrus Ansip, commissioner with responsibility for the Digital Single Market

The timing of European Commission vice-president Andrus Ansip’s visit to Dublin could not be more politically sensitive. The former Estonian prime minister is due to meet Taoiseach Enda Kenny, Minister of State for European Affairs Dara Murphy, Fianna Fáil leader Micheál Martin and representatives from US multinationals including Facebook, Google and Yahoo on Thursday.

As commissioner with responsibility for the digital single market, Mr Ansip and Ireland are usually on the same page.

Ireland, along with a core group of northern EU countries and Britain, has long supported the development of a European digital market. Mr Ansip’s own country, Estonia, is also regarded as a vibrant, open economy, which shares with Ireland an economically-liberal vision for the European Union.

But the Government can expect little support from Mr Ansip on the issue of Apple. Speaking to The Irish Times ahead of his visit, Mr Ansip asserted that the case is justified.

“This State aid case is based on facts. I think we all would like to have fair competition in the European Union, ensure that all players, all companies have to be treated equally – the same applies to Apple. If one restaurant for example has to pay all the taxes according to law, and a restaurant next door does not, what kind of fair competition is that?”

He also disputed the characterisation of the Apple decision as a retrospective move, arguing that all state cases deal with what happened in the past.

While Apple will be the elephant in the room during meetings with representatives of the US multinationals, in other ways the US business lobby in Ireland has been a keen supporter of the EU’s moves in the digital space.

As the European headquarters for most of the world’s top tech companies, Ireland has found itself caught in the crosshairs of the EU’s moves to regulate transatlantic data flows as well as the tax behaviour of US companies.

More than 100 digital companies have now signed up to the EU-US Privacy Shield, the controversial rules that replaced the Safe Harbour Agreement which was thrown out by the European Court of Justice last year.

The Privacy Shield has been criticised by data protection campaigners. Is Mr Ansip confident that the new pact can stand up in court if challenged? “I am absolutely sure that this EU-US Privacy Shield is a much better solution than the Safe Harbour was,” he says.

“When the Safe Harbour was created, the aim of the agreement was positive to protect the privacy of European citizens in the United States, but at that time in 2000 we didn’t have any idea of what kind of technical possibilities there would be for example for mass surveillance in the year 2013. It took 13 years to understand that the Safe Harbour was not so safe.”

Mr Ansip highlights the establishment of an ombudsman in the new agreement, as well as the review clause. “If there are problems, then we don’t have to wait for another 13 years – this time we can fix it as needed.”

As the EU reflects on its future post-Brexit, Mr Ansip believes that the creation of a digital single market should be a cornerstone of the EU’s next phase of development, though the imminent exit of Britain means that the policy will be losing a key supporter.

“Twenty years ago we were able to create a single market within the European Union, and I think everybody benefitted, including Ireland. But the problem is that a single market for the digital sphere does not exist.

The European Parliament estimates that the cost of this is €415 million. But this is not just a question about money, it’s about fundamental rights. Why should we accept in the 21st century discrimination based on nationality, where our credit card is located?”

While consumer-friendly measures such as the abolition of roaming charges for 90 days a year and changes to “geoblocking” and “portability” rules – ie, allowing EU citizens to access their Netflix subscription while abroad – will be welcomed by consumers, Mr Ansip risks antagonising content producers, from composers to newspapers to digital television providers.

One battle on the horizon is proposals to overhaul EU copyright and telecoms rules, which could be published as early as next week, and will be watched closely by internet giants as well as traditional media companies.

The road to creating a fully-fledged digital single market may still be some way ahead, as the EU works to adapt its single market rules to the digital age.