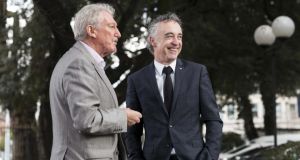 The network, which is a joint initiative of InterTradeIreland and Enterprise Ireland, serves as a go-between to bring start-ups and investors together. Key sectors include ICT, healthcare, consumer products and food.

Business angels linked to the network invested a total of €13.6 million in start-ups locally in 2016, up 25 per cent on the €10.8 million raised a year earlier.

The network’s annual report shows the angel investments drew a further €20.5 million from other public and private funds, bringing the total invested in start-ups through the network last year to €34.1 million. The average investment total also rose by €550,000.

HBAN, which was established in 2007, organised 51 funding events around the country last year, including a 48-hour roadshow that raised €6 million in October.

“Every year, hundreds of promising Irish start-ups approach us looking for smart money – in other words, funding that is paired with deep domain knowledge and mentorship from investors with specific industry expertise. With the start-up community showing no signs of slowing down, we are constantly on the look-out for more angels to join our network and we expect to be announcing even more positive results this time next year,” said HBAN national director John Phelan.

1 Money matters: ‘My father embarrassed us with his haggling’
2 Pilita Clark: When a rude boss keeps you waiting, why not walk out?
3 Henderson Park seek €400m+ for prime Dublin office blocks
4 Opioid executive admits to ‘no morals’ ahead of prison term
5 Comcast acquires Irish cloud-based telco Blueface
Real news has value SUBSCRIBE