Adapting to the constantly changing world of IT 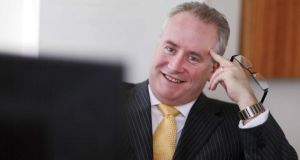 Philip Maguire: “We are seeing growth of around 12 per cent per annum.”

IT Alliance is one of Ireland’s largest indigenous providers of IT outsourcing and managed services. The company employs 420 people and will have a turnover this year of about €30 million.

Founded by chief executive Philip Maguire in 1997, IT Alliance has been through some very good and some very tough times. Within four years of start-up the company had more than 300 employees and a turnover of €14 million. But it was badly hit when the dot.com bubble burst and again more recently when the global downturn saw retrenchment by its blue-chip clients.

According to Maguire, lessons learnt during the dot.com meltdown equipped the company to deal faster and more effectively with the challenges of this recession. First time around, management was so busy coping with the exponential growth powered by the dot.com boom that it was unprepared for the crash. This time, the antennae were finely tuned and speedy remedial action was taken at the first sign of trouble.

“In 2001 we had a big team of senior managers running three divisions and everyone was flat out. We had quarterly management accounts and by the time we looked at them the cost base was completely out of kilter and some very difficult decisions had to be made,” Maguire says. This involved cutting the senior management team from 10 to three and staff numbers from 350 to 220. Turnover dropped from €14 million to €10 million.

“I fiddled around the edges initially but quickly realised we needed to make one very deep cut starting at the top. It was awful but necessary and provided a salutary lesson in why it is vital to have detailed monthly accounts,” says Maguire, an electrical engineer by profession and an MBA graduate from Trinity College Dublin.

Having made the cuts, Maguire “sat on his hands” to give the company time to recover but took the opportunity to revisit his strategy.

He turned for help to Professor Joe Peppard from Cranfield School of Management in the UK and having identified an imminent sea change in the IT outsourcing sector, reinvented the company’s business model.

“At that time the global IT outsourcing vendors were coming under the same cost and margin pressures that forced their clients to look to the market for the provision of services in the first place,” Maguire says. “Our aim was to fill this need by becoming the outsourcer to the outsourcers.”

IT Alliance’s clients include Microsoft, HP, IBM, Dell and BT. Its services include programme and project management, infrastructure stack, testing and QA, and services around Microsoft CRM and Sharepoint. The company has offices in Dublin, Belfast, Cork, Sheffield and London.

As part of rebuilding the company following the dot.com setback, Maguire secured a sizeable amount of business within the UK financial services sector. Staff numbers crept back over 400 and turnover was heading for €30 million.

“In 2008 that business dried up and we took a hit of around €10 million. This time with a more flexible model in place we pared back quickly. Things have started to pick up now and we are seeing growth of around 12 per cent per annum. If you’re really in tune with your customers you should spot the signs. Part of our vision is to create value through strategic alliances and we are joined at the hip with our key partners and customers.”

Monitoring of costs
Maguire says the company has made change a constant part of its culture and that it is continually refining its business model and backing that with close monitoring of costs and investment in people. Now 16 years in operation, he believes the company is moving into phase three of its lifecycle and says that traditional IT provision is in the process of changing forever.

“It’s becoming all about having computing power available however and whenever you want to consume it. Traditional methods won’t be around in four or five years,” he says.

In response to the prospect of a changed market Maguire has launched two new divisions. The first is Alliance Resourcing Services (a recruitment initiative to source IT talent) and the second is Auxilion, a cloud-based IT services provider launched last year. “We are now looking at where we can take our model in Europe with our partners and leverage Auxilion to provide companies with a real-value proposition based on simplification and taking real cost out of their business,” he says.

“The challenge facing the IT sector is that it is ‘mature’ for such a young industry. This is reflected in the fact that new software launches are not as frequent. It doesn’t make sense to do big software development in Ireland when you can outsource to a lower-cost location.”