2050 vision: Google and Apple among few tech giants to survive

Analyse this: in the rapidly evolving world of internet technologies, how can you attempt to predict the future? 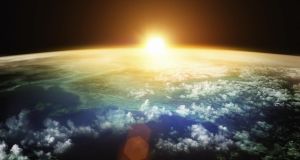 It’s the job of any industry analyst to think about the future. But for Stephen Prentice, a vice-president and fellow with analyst Gartner, “the future” really means the future.

Forget the usual five- to 10-year predictions. He loves 20-year event horizons, and will even push out to more distant dates, as in a recent presentation on technology trends in 2050.

Why the fascination – on his own part, and of audiences – with the distant future?

“It’s voyeuristic. We’re all geeks at heart,” he says with a laugh. “It’s the same thing that causes people to queue outside the Apple Store for the latest iPhone.” And that thought sparks a whole set of predictions, offered over a lunch break while Prentice was on a visit last week to see customers in Ireland.

“One really interesting trend is that we’re starting to see the demise of the smartphone for the wearable device,” he says. We mostly use our smartphones now for everything but making phonecalls – we’re online, shopping, or searching for something, commenting on Facebook or making a tweet, or using interactive maps to get somewhere.

It’s not really the individual smartphone that we adore, “it’s the ecosystem that we love”.

As an aside, he adds: “You know when a device gets banned before its release, that it’s very, very disruptive” – meaning Google Glass. Such a response to an internet-base technology that will likely form the core of many wearable computing devices is a sign of pending change.

Prentice – who describes his speciality as “the evolving relationship between technology, business and society” – expects electronics firm Samsung “to go strongly into that”, offering wearable devices that merge numerous tech capabilities. But Samsung faces an uphill battle in the area simply because the company, like Nokia before it, “doesn’t own an ecosystem”. Google, with its Android system and many services, and Apple, with the same, do.

Apple is in a strong position not just because of its ecosystem, but because it has a smart chief executive – “[Tim] Cook executes better than just about anyone” – a designer in Jonathan Ive “who knows how to make desirable devices”, and the adoration of its customers, “a passion that transcends logic”.

For those reasons Apple, as well as Google, are on his extremely brief list of technology companies likely to survive the next wave of technological change, which he predicts will come around 2030.

Technology has gone through a number of such waves. “It’s actually quite rare for companies that do well in one wave, to move on to the next,” he says. Transition is a challenge, and the companies that define a new era are typically new themselves, and often come from nowhere: think Google or Facebook at the moment.

The few that have survived successfully from one wave to another are those that are most able to reorient and redefine themselves, companies like IBM, which has remained a technology leader for decades despite some close shaves, such as the emergence of home computing, that threatened its existence. So IBM goes on his list of potential next-wave survivors.

Interestingly, he thinks Nokia is in with a good chance, too. After all, the Finnish company has been around since 1865, doing many things other than mobile communications. Selling its mobile arm to Microsoft was absolutely the right thing to do: “They were on a steady slide to obscurity, and took the only strategy they could.” Now Nokia can reinvent itself.

That’s the survival strategy for any company that hopes to make it from one technology wave to the next, he says – because these days every business sector is so closely entwined with technological developments, so increasingly they will have to innovate as aggressively as technology companies.

That has potentially alarming implications for investors, he says. Prentice believes that businesses are now going to be tied to those innovation waves in boom-and-bust cycles, with few companies of one cycle surviving into the next. That means long-term investments will become increasingly impossible.

Companies cannot just innovate once. “There is no postinnovation cycle,” he quips.

In the technology industry, almost every company is in a “dangerous phase” right now, facing a constantly changing landscape where they may not innovate fast enough. “But it’s an interesting business landscape, chock full of opportunity, too.”

He thinks many existing companies will be blind-sided though. Today’s leading companies tend to benchmark against others in their industry, but this makes them liable to miss the rising challenger that doesn’t play by the rules. Successful companies look outside their own sector, to other industries, he says.

As for the looming next wave that’s going to rise in about 2030, he says that will be all about bio-organics, with a focus on areas like the development of artificial DNA, the exploitation of the human genome, and DNA replication.


Prentice’s picks
Disrupters to watch
Some of the more disruptive areas in the technology industry that Stephen Prentice expects to develop further over the next 20 years, are:

3D printing
“It’s one of the most transformative developments in technology,” likely to have an impact on everything from manufacturing to retail, removing whole chunks of the current product development chain.

Booming ‘maker’ culture
An ironic upside to the economic crisis has been lots of smart people out of work, finding they can create and innovate on their own, says Prentice.

The technology equivalent of home-brewing, makers tinker and code on their own or in groups, with many starting their own small companies or working freelance.

Crowdsourced funding
Thanks to organisations like Kickstarter, “there’s now a critical mass of young entrepreneurs that realise there’s an infrastructure that lets them do what they want,” without traditional support.

Robotics/thinking machines
Increasingly, intelligent machines will be used not just for complex manual tasks but also, will replace knowledge workers in many areas.

Sensors and the ‘internet of things’
This means we will be surrounded by a smarter, more personalised living and working environment.

Several of these areas are in an early phase of development, but “every one is potentially disruptive to an entire industry and every one poses huge legal, ethical and moral issues. But a big challenge has never stopped anyone,” says Prentice.

It’s easy to see that he can’t wait to see what happens next as the technology sector shifts and transforms.

“I’ve lived through the entirety of the cycle of PCs,” he says, noting he built his first one decades ago from a kit.

“But it’s much more fun now. It’s an exciting time.”

1 How to gift your child a house deposit . . . tax free
2 BOI customers to be charged twice with bank fees on New Year’s Eve
3 Decades of work and a bit of luck drove Oxford vaccine success
4 Ryanair warns it may reduce more services and relocate operations
5 Son putting elderly dad under pressure to sign over land
Real news has value SUBSCRIBE