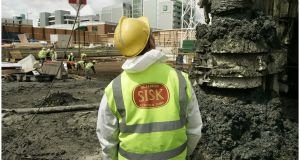 The UK division of John Sisk & Son builders has been kicked off a British government register of contractors for failing to pay its suppliers in time.

The overseas official set to become the next Central Bank governor presided over an OECD report that named Ireland during the Celtic Tiger years among countries engaged in potentially harmful tax practices. Joe Brennan has the details.

The UK division of John Sisk & Son builders has been kicked off a British government register of contractors for failing to pay its suppliers in time, putting its ability to win future British state building contracts in jeopardy. Mark Paul reports.

The office of the Irish Data Protection Commissioner has opened investigations into 17 multinational technology companies headquartered in Ireland, eight of which involve Facebook, commissioner Helen Dixon has said. Suzanne Lynch reports from Washington.

Energia has agreed a €44 million debt finance package with AIB for its bioenergy plant under construction in north Co Dublin, writes Peter Hamilton.

How much data are you giving away every day? You may be surprised to realise just how much data is being gathered about you, writes Ciara O’Brien, even if you have disabled a lot of the more obvious settings.

Fiona Alston hears how corporate gift giving is being reinvented.

Charlie Taylor meets the man bringing cryptocurrencies in from the cold.

Karlin Lillington is sick and tired ofdisruptors and innovators.

In our Inside Business podcast Ciarán Hancock hears about Trinity College’s business model and just how important the Book of Kells is.

“Before the next decade is out, Ireland can become a global leader in start-up innovation, ” says Dómhnal Slattery, and he tells us how it can be done.

Resident pointy head Cantillon wonders if Ireland’s tech troublesare more a problem in Europe than Washington and reflects on the appointment of the new Central Bank boss.

1 ‘I don’t need to do any of this. . .I don’t actually need to work.’
2 Admission of mistake in Oxford vaccine dose raises doubts over reliability
3 Promontoria barred from pursuing doctor over Ulster Bank loan
4 Anti-alcohol zeal of public health experts peppers reopening debate
5 Online shoppers face unwelcome tax surprise
6 A tale of two pandemics for Smurfit Kappa and Greencore
7 Karlin Lillington: How I managed to cut my mobile phone bill by at least half
8 ‘Make plans but don’t hold on to them too seriously’
9 Oxford-AstraZeneca vaccine may be trialled again to prove results were ‘not a mistake’
10 AIB revives €1bn-plus problem mortgages sale
Real news has value SUBSCRIBE