Trading thin in Europe, with most markets closed for May Day holiday 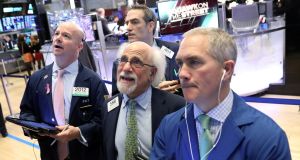 Traders working the floor of the New York Stock Exchange. The S&P 500 notched a fresh record high on Wednesday as gains in Apple’s shares powered a rally in tech stocks. Photograph: Reuters

Global equities advanced on Wednesday for a fourth straight day of gains as Apple’s strong results soothed concerns about earnings growth ahead of a Federal Reserve policy statement. Apple shares jumped more than 6 per cent to keep all three major Wall Street indexes on the plus side.

The iPhone maker beat depressed expectations despite a record drop in phone revenue, gave an upbeat assessment of its China business, said it would buy back $75 billion in shares and hiked its dividend. The gains pushed Apple closer to the $1 trillion market capitalisation yet again.

Trading was thin in Europe, with most markets closed for the May Day holiday and only London and Copenhagen open for trading. The pan-European Stoxx 600 index lost 0.07 per cent, and MSCI’s gauge of stocks across the globe gained 0.18 per cent.

Market closed for May Day holiday

London’s FTSE 100 dipped to a one-month low on Wednesday as oil majors dived after US inventories bulked up and a rise in the pound knocked exporters. However, gains in Sainsbury’s and LSE following upbeat results helped cushion the fall.

Shell shed 1.4 per cent to a month low, and BP gave up 2.1 per cent as crude prices weakened after US oil inventories rose more than expected with output reaching a new record of 12.3 million barrels per day.

As sterling rose to multi-week highs with lingering hopes of progress in cross-party Brexit talks and ahead of Bank of England interest rate meeting on Thursday, exporter companies bore the brunt as much of their revenue is earned in dollars.

British American Tobacco, AstraZeneca, GlaxoSmithKline were among the biggest drags. Another big fallers on UK’s blue-chip index was takeaway group Just Eat with a near 3 per cent drop after JP Morgan called European rivals Delivery Hero and Takeaway.com more attractive.

Education group Pearson lost 2.1 per cent after news of a planned merger between Cengage and McGraw Hill, with Liberum analysts calling the planned deal a “major headache” for Pearson.

However, earnings reports boosted many blue-chips. Sainsbury’s jumped 4.3 per cent after the supermarket group’s underlying full-year profit beat market estimates and it said it would accelerate investment in its store estate and technology.

London Stock Exchange climbed 3.4 per cent after it reported higher quarterly income as its clearing and information services businesses grew strongly against what it called a challenging market backdrop.

Lloyds rose 1.6 per cent after it cut its target for its Common Equity Tier 1 ratio – a closely watched measure of balance sheet strength – with Goodbody analyst John Cronin saying that meant more headroom for distribution to investors.

Main bourses were closed for May Day holiday

The S&P 500 index notched a fresh record high on Wednesday as gains in Apple’s shares after forecast-beating results powered a rally in technology stocks ahead of the Federal Reserve’s latest policy announcement.

Shares of the iPhone maker jumped 6.37 per cent after the company said sales in China were steadying and touted how rising demand for its services and accessories helped offset a record drop in iPhone revenue.

The company also announced plans for a new $75 billion share buyback and bumped up its cash dividend by 5 per cent.

Apple’s shares boosted the S&P 500 index, which clocked another record closing high on Tuesday and registered its best four-month rally in nearly nine years. The technology sector gained about 0.86 per cent, the most among the 11 major S&P sectors.

Besides a largely upbeat earnings season, recent gains in shares have also been powered by positive economic data, a dovish Federal Reserve and signs of progress in US-China trade talks.

Investors will also look for direction on monetary policy when the Fed concludes its two-day meeting later in the day. The central bank is largely expected to keep borrowing costs unchanged and maintain a “patient” monetary policy stance, despite US president Donald Trump’s call to cut rates.

The financials sector, which tend to benefit from a rising rate environment, dropped 0.17 per cent, with S&P banks off 0.23 per cent.

Hilton Worldwide jumped 7.2 per cent, the most among S&P 500 companies, after the hotel operator reported quarterly revenue above analysts’ expectations.

Energy stocks tumbled 0.94 per cent, weighing the most on the S&P 500, as oil prices touched a session’s low after an unexpected rise in US crude inventories.