Taking the oops out of groups 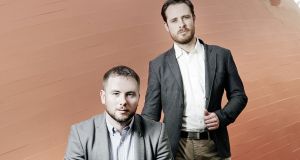 As anyone who has ever made travel arrangements for a group knows, it would be easier to herd chickens. The good news is that help is at hand. It’s called Groopeze and it’s an online travel agency for groups that can facilitate multi-destination, multi-item itineraries.

“Groopeze is reinventing how online group bookings are made, managed and paid for, and is making the whole process hassle-free for those making bookings and those accepting them,” says Darragh Kirby, who co-founded the company with Shane Murphy in 2013.

“Groopeze works for all sorts of groups, from family celebrations to corporate events. It also helps service providers improve their throughput by removing the time consuming problems typically associated with handling groups.”

Murphy and Kirby met while studying industrial and product design at NCAD. They followed this with postgraduate studies in computer science, web development, business and entrepreneurship respectively. Both have previous start-up experience. Murphy is the technical lead while Kirby is in charge of business development.

As keen sportsmen, both had experience of managing group bookings at college. When their friends started getting married, they experienced similar “herding chickens” problems with their stag parties. “We had decided to start our own business and were tinkering around with a few ideas,” says Kirby. “But when we came up against the same organisational problems with the stag parties, this sparked the idea for Groopeze. We left our jobs in 2013 and started working on the idea in a Seomra in Shane’s back garden.”

The beta platform has roughly 10,000 users and the company will launch version two of its platform at the end of October. This launch will bring the investment in the business to date to around €500,000. Groopeze won the Jumpstart competition run by the LINC innovation centre at Blanchardstown IT in 2015 and it is now co-located between the LINK and the National Digital Research Centre.

“In looking for our solution, it became clear that there was nothing that could address all the issues around group bookings – from collecting money to finding places willing to take groups – all in one go,” says Murphy. “Equally, there was nothing to help service providers manage groups more easily. Some service providers are using software platforms to try and cope, but the platforms are unsuited to the task. Others are still recording all the information manually.

“It would be very difficult for an established company to change their business model to copy ours as they would have to build an entire group management platform and it would also take months to put agreements in place with suppliers.”

Groopeze makes its money on discounted rates from suppliers. “We are completely transparent, with a breakdown of prices per person and per item. This develops trust with our customers as they know they are not being ripped-off,” Kirby says. “We are also offering a white label group booking tool to suppliers to manage their own group bookings from other channels.”