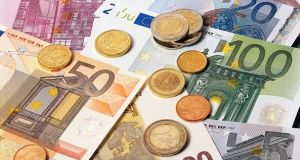 Over €22 billion of the State funds invested in the banks came from the National Pension Reserve Fund. Photograph: Getty

The additional state borrowing undertaken as part of the bank bailout has already cost the state almost €9 billion to service, according to the report of the Comptroller &Auditor General.

This cost largely offsets all the income which the state received from the banks in return for giving them the guarantee.

The C&AG calculates that the total cost of the bailout has been €60 billion so far for the State.

Against this it offsets the value the State is attributing to its remaining holdings in the banks of around €17 billion, giving a net figure of €43 billion.

In addition it says that additional cost of servicing the national debt associated with the bailout will be between €0.85 billion and €1.7 billion per annum.

The calculations by the C&AG of the costs incurred from servicing the bank bailout debt provides new information on the cost of rescuing the banks.

As well as additional money borrowed by the State, the figures include the return which would have been expected from funds in the National Pension Reserve Fund, which were diverted into recapitalising the banks.

Over €22 billion of the State funds invested in the banks came from the NPRF.

On the plus side of the ledger, the State has recouped over €5 billion from selling stakes in the banks. Also, the figures do not include an expected surplus from the winding up of IBRC, or a surplus of around €1 billion now expected form the winding up of Nama.

Minister for Finance Michael Noonan has said he believes that the State will recoup all the money put in to the three remaining banks, but not the €36 billion spent on Anglo and Irish Nationwide, now merged into IBRC.

Achieving this would require a higher return than currently counted in the state books for the sale of AIB and the expected returns from IBRC and Nama to come through.