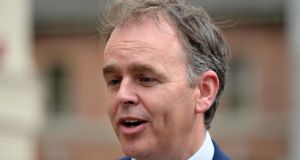 Joe McHugh: said Executive Helicopters Ltd had been selected as the “preferred tenderer” for the Aran Island air service contract for the next four years

Aer Arann Islands airline owner Pádraig Ó Céidigh has said he is “devastated” and “disappointed” at a Government decision to award the State’s air service contract for the three Aran Islands to a Galway city helicopter company.

A total of 40 jobs at the airline are expected to be lost as a result of the contract transfer, which was announced by Minister of State for the Gaeltacht Joe McHugh yesterday evening.

Mr McHugh said that Executive Helicopters Ltd of Woodford, Co Galway, had been selected as the “preferred tenderer” for the Aran Island air service contract for the next four years.

“Under the new contract, daily return flights by helicopter will be provided between the islands and Galway Airport for the period from October 1st, 2015 to September 30th, 2019,” Mr McHugh said in a statement, adding that he was “pleased to be able to make this announcement today”.

Mr Ó Céidigh said that it represented the “single biggest blow” to the Aran Islands in its recent history.

It is expected that he will be forced to close his company, which was founded in 1970 to provide an air service to the offshore communities.

Mr de Blacam, who is Inis Meáín’s representative on an action group formed to retain the air service, said that he did not know how he could continue to run his knitwear business under the new arrangement.

Islanders formed Coiste leis an Seirbhís Aeir a Chosaint (Save our Air Service committee) after a new tender for the scheduled public service obligation (PSO) air service to the three Aran Islands put a cap on the overall cost at €900,000 annually, representing a 30 per cent cut.

When the new tender was advertised, it allowed for use of both Inverin and Galway airports, even though Inverin airport is just 8km, or nine minutes, by road from the ferry port of Rossaveal.