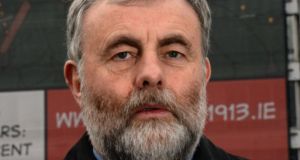 Siptu, the country’s largest trade union, is to seek pay increases of 5 per cent across the public and private sectors.

In a speech today, Siptu president Jack O’Connor also announced the union would engage in a “battle to establish a minimum living wage of €11.45 per hour”.

Mr O’Connor also called on social democrats, left-wing republicans and independent socialists to join together on a common platform with the aim of winning the next general election and establishing the country’s first left-of-centre government.

Mr O’Connor also signalled the establishment of a national campaign to pressurise the Government into “commencing the task of abolishing the universal social charge and replacing it with a new mechanism which will be equally efficient as a means of raising revenue from the better off while removing the burden on those on low to middle incomes”.

Mr O’Connor was speaking in Glasnevin Cemetary in Dublin to mark the anniversary of the death in 1947 of union leader James Larkin.

In his speech Mr O’Connor argued that the trade union movement was “back on the offensive” to begin regaining ground lost by workers during the economic crisis.

He maintained that “difficult compromises” such as the measures set out in the Croke Park and Haddington Road agreements in the public service and a protocol agreed with private sector employers were “elements of a rear-guard strategy designed to hold as much ground as we could in the face of overwhelming odds”.

“We adopted it in order to limit the outsourcing of jobs on an industrial scale, to maintain the basic integrity of our social welfare system and key public services, to forestall the wholesale sell-off of our critically important public enterprises at bargain basement prices, to protect the right to organise and to prevent the abolition of the legislative mechanisms that serve as the threshold of decency for pay and terms of employment in our economy. This was the correct course at a time when the State budget deficit was the highest in all of Europe, higher even than that of Greece. ”

Mr O’Connor said that in the light of improving economic conditions, Siptu would be embarking on a major campaign targeting pay increases of 5 per cent across the economy.

He also said the union would “ soon be confronting exploitation in a new battle to establish a minimum living wage of €11.45 an hour across all those sectors of the economy where the gross exploitation of vulnerable workers is the order of the day”.

The Siptu leader also called for the proposed new left-of-centre coalition to develop a political project aimed at winning the next general election on a common platform: “ Let’s call it Charter 2016”.

“This would entail the most difficult and challenging intellectual and political task, because when the moment arrives, [and] the proportion of the electorate who will decide the outcome demand to know what we are for, as distinct simply from what we are against, we have to be able to answer the question comprehensively.

“We have to face up to the reality that it will not be possible to rebuild our public health service, eradicate housing waiting lists, develop a proper pension provision for all who work in the private sector and all the other aspects of public provision which characterise a civilised society, while simultaneously abolishing property tax, eliminating water charges and removing the burden of the universal social charge on low to middle income families, all in one go.

“We have to develop clear, coherent priorities around egalitarian concepts of public provision underpinned by fair taxation and sustainable economic growth. Moreover, we have to be able to demonstrate the capacity to provide stable Government and an economic and industrial policy that recognises the reality of globalisation and the key role that foreign direct investment must continue to play here for a long time to come.”

“However, what the first left-of-centre government in the history of the State could do is to reassert the interests of the common good, shifting the balance decisively in favour of working people and those who depend most on public services.”

Mr O’Connor strongly welcomed the victory of Syriza in Greece last weekend and contended that it signalled “the end of the nightmare of the one-sided austerity experiment which has bedevilled the peoples of Europe and threatens the future of the democratic system itself”.

He said although the European Central Bank’s (ECB) major initiative on quantitative easing offered the prospect of stalling a total collapse, it would not succeed in the absence of a parallel fiscal initiative to stimulate aggregate demand across the continent.

Mr O’Connor backed the calls by Syriza for a debt conference.

“They are promoting a sophisticated formula for the warehousing of debt by the ECB, which is being crudely misrepresented as a simplistic demand that their liabilities be written off. The course they are promoting would facilitate the release of hundreds of billions of euro to ramp up the Juncker Plan to the level demanded by the European Trade Union Congress in their imaginative call for another “Marshall Plan”.

“This could provide the resources to conclude a new settlement between capital and labour in every stressed country, entailing a trade -off between major fiscal initiatives to promote job creation and growth on the one hand and reforms in employment policy on the other, underpinned by a progressive system of flexicurity.”

“This new concordat would replicate the great post war settlement, which resulted in more than a generation of unprecedented and consistent economic growth, raising living standards in western Europe to a greater degree than had ever been experienced before over a similar timeframe in recorded history.”

Ibec, the group that represents Irish business, responded to the Siptu leader’s comments by saying that the idea that businesses or the Government could afford 5 per cent pay rises this year were “reckless, foolish and utterly detached from economic reality”. The group said that many companies were still struggling to survive and keeping costs under control is crucial to maintaining current employment levels and creating new jobs.

Ibec CEO Danny McCoy said: “Talk of widespread large pay rises is ludicrous, when the country is only starting to get back on its feet. Clearly lessons have not been learnt from the crisis.

“The economy in money terms is still about 6 per cent below its pre-crisis levels and overall prices are below where they were in summer 2008. In retail, for example, turnover is still nearly 20 per cent down and businesses are constrained by boom time costs and charges. This needs to be reflected in pay expectations.

“It is vital that we don’t lose the hard fought competitive gains of recent years. The focus must be on job creation. This year we have the chance to further cut unemployment and attract back migrants that left, but we must not repeat past mistakes. If costs spiral and we lose our competitive edge we will pay for it in jobs.