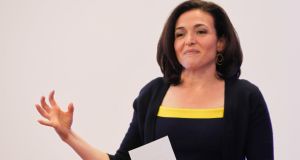 Gender quotas “can be very useful” but “will never be the full solution to the problem” of inequality in the workplace, Facebook’s high-profile chief operating officer Sheryl Sandberg told an audience in Dublin today.

Ms Sandberg said that even situations where quotas have had proven effects do not demonstrate their ultimate benefits.

“Even when they’re used, and used successfully, they have not moved other metrics,” she said, addressing an invited audience at Facebook’s office. She highlighted Norway, where larger boards must have at least 40 per cent female participation, but where the percentage of female chief executives is still in single digits. She acknowledged though that is not “appropriate” for her to “go around the world” advocating public policy shifts for governments.

More significant, Ms Sandberg argues, is challenging basic stereotypes, in every context. She urged the audience, mostly comprised of female students, to refrain for example from labelling little girls as “bossy”, where the same qualities in little boys might identify them as leaders.

“That little girl has executive leadership skills,” might be a good alternative, she suggested.

Ms Sandberg was in Dublin to discuss the new graduate edition of her book, Lean In: For Graduates . The book builds on Ms Sandberg’s original Lean In: Women, Work and the Will to Lead manifesto, which was published last year and which has generated both lavish admiration for furthering the cause of female leadership and trenchant criticism for what has been described as “faux-feminism”.

“Leaning in” for Ms Sandberg involves both women and men working towards gender equality, obeying basic principles such as attempting to do what you would do if you weren’t afraid, or combining success with likeability. Women should take up opportunities even when they don’t feel they are fully capable of doing so, according to the Lean In philosophy. The graduate edition of her book contains chapters on negotiating a salary or finding one’s first job.

“I really believe that women to to come into the workforce leaning in,” Ms Sandberg told the audience. She asked how many of the working women present had been asked, “should you be working?” and told the students that they would definitely face the question in the future, whereas their male counterparts would probably never hear it.

“This is the generation that changes it and they change it by believing in themselves,” she said of today’s young women.

Ms Sandberg acknowledged that women who choose to have children and work outside the home can face “a motherhood penalty”, or a basic discrimination that does not affect fathers.“You should be able to have children whenever you want,” she said, rejecting the idea that such decisions should be influenced by career progress at a particular stage or that parenting should be primarily a female role. Childcare, which she said costs one quarter of the typical Irish income, should be cheaper, she believes. She also cautions against comparing childcare costs to a parent’s income close to the start of their career, arguing that they should consider instead how much they could earn later on if they managed to remain on the ladder.

“We’re not going to get equality in the workplace until we get equality in the home,” Ms Sandberg said. She pointed out that in Ireland, women do twice as much housework as men even when both work full-time, claiming relationships are happier when there is a greater sense of partnership.

“I think that women feel guilty no matter what they choose,” Ms Sandberg said, somewhat endearingly including herself in the judgement. She believes men are so long-practised in leaning in that it is not an issue for them.

“Women are much more torn,” she said.