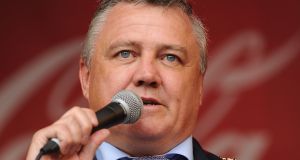 Lord Mayor of Dublin Brendan Carr: plans a 1 per cent hotel levy on hotel rooms. It could could deliver up to €3 million a year for the arts, the Sunday Times reports. Photograph Sam Barnes

Apple remains the focus for the business pages with all the Irish Sunday broadsheets leading on the story. The Sunday Business Post follows up The Irish Times story about the EU Commission looking at the tax arrangement of a number of other multinational companies in Ireland, while in the Sunday Times IDA Ireland chief executive Martin Shanahan says the EU ruling is as bad for Ireland as our bailout during the financial crisis or the Brexit vote. The Sunday Independent carries a second instalment of its interview with Apple chief executive Tim Cook.

Dublin’s lord mayor, Brendan Carr, plans a 1 per cent hotel levy to fund arts initiatives in the capital, the Sunday Times reports. The levy along the lines of similar charges operating in many European markets, could deliver up to €3 million a year, the paper reports.

Merger and acquisition activity in the Irish market is “significantly down” on last year and likely to remain so for the rest of the year, according to the Sunday Independent, quoting IBI Corporate Finance chief executive Tom Godfrey who blames the Brexit vote in the UK and the uncertainty it creates around Britain’s future relationship with the EU.

The takeover of Dealz parent Poundland is on a knife-edge, the Sunday Telegraph writes, with US hedge fund Elliott Management having built up a stake of close to 25 per cent in the British business. Elliott has already forced bidder Steinhoff to raise its bid once. Steinhoff cannot raise the price again, according to the paper.

An investment partnership comprising some of the biggest names in Irish business – Ardagh’s Paul Coulson, developer Bernard McNamara and Paddy Power Betfair chairman and former Anglo Irish Bank non-executive director Gary McGann – is talking to the NTMA about recovering close to $500,000 from the IBRC under the eligible liabilities guarantee scheme, according to the Sunday Independent.

2 Online banking: Are we getting less but paying more?

8 Insurance broker Lockton to create up to 50 new jobs