Robinhood is out of the forest with star investors and capital 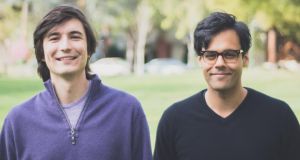 Up to half a million people have already signed up for Robinhood’s zero-fee stock trading service, it has raised $16 million (€12.8m) in venture capital funding and celebrities including Snoop Dogg and Jared Leto have invested in it.

The company is perhaps the world’s most successful start-up that hasn’t even started. It is due to launch in 2015, and is currently using the VC funding to expand the testing of its service and hire additional engineers, designers, and support team members.

“We were classmates and roommates. After graduating, we spent time on Wall Street and built two companies together; a trading firm and a SaaS trading technology provider,” Tenev says.

“We realised that high-frequency trading firms pay effectively nothing to execute trades, whereas everyday investors must pay $7-$10 (€5.6-€8) for every trade. We thought there was something inherently wrong with this, and so we set out to create Robinhood.”

Robinhood combines a sophisticated, proprietary automated trading platform with a simple user interface, giving customers access to real-time stock quotes, notifications and alerts, and the ability to place unlimited zero-commission trades on all US listed stocks and ETFs.

The two believe that investing is a right and not a privilege. By eliminating trading commissions, the start-up’s mission is to enable a new generation of people to learn about investing and better manage their wealth.

“Everyone should have access to the financial markets. We’re thrilled to be leading this effort,” Tenev says.

Since the two announced Robinhood in December of 2013, almost half a million people have signed up.

“We chose a wait list model as it allows Robinhood to scale efficiently, and control the influx of customers. We are a financial company and we realise there is no room for error. The wait list allows us to ensure that the Robinhood experience is secure and seamless,” Tenev says.

This follows a $3 million (€2.4m) seed round which Andreessen Horowitz and Google Ventures participated in.

With no commission charged, how will the start-up make money?

When it launches next year, users will be able to invest in publicly-traded companies and exchange-traded funds listed on US exchanges. This includes well over 5,000 securities.

Users can link their bank account with their Robinhood account, allowing them to transfer funds between each. You can use these funds to buy and sell stocks.

The company has received approval from the Financial Industry Regulatory Authority (Finra) to operate as a securities broker-dealer in the US. This approval allows Robinhood to offer stock, corporate bond and option trading.

“For now, only US listed securities can be traded with Robinhood but we hope to expand to other markets over the next year.”