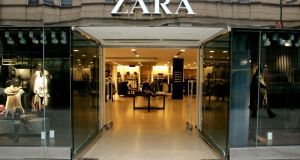 Net income rose 26 per cent to €1.17 billion in the six months through July, Arteixo, Spain-based Inditex said Wednesday in a regulatory filing. Revenue rose 16 per cent in the start of this quarter, excluding currency shifts.

Inditex has opened more than 400 stores annually on average over the past five years. The 3.1 per cent growth that economists forecast for Spain’s gross domestic product this year is bolstering sales in a market where Zara sells €129 leather jackets and €30 turtleneck sweaters. Unlike rival Hennes and Mauritz AB, which has a bigger reliance on dollar-denominated garments sewn in Asia, Inditex benefits from a stronger dollar. The dollar was on average 24 per cent higher against the euro during Inditex’s first half.