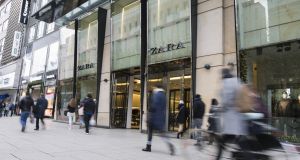 Zara is just one of the brands owned by of Inditex and ITX Fashion: others include Bershka and Massimo Dutti. Photographer: Martin Leissl/Bloomberg

Zara owner Inditex is gearing up for global online growth, but its Dublin based operation ITX Fashion may no longer play a central role in the Spanish fashion giant’s ecommerce development.

First launched as ITX E-commerce back in 2007, ITX Fashion is responsible for the fashion giant’s online sales in Japan, the US and Canada, with significant sales going through the Dublin operation. Inditex also employs several hundred people in stores across Ireland, in its range of brands which include Zara, Bershka, and Massimo Dutti.

According to accounts just filed with the Companies Registration Office (CRO), ITX Fashion reported sales of some €225 million in the year to January 31st 2015, a decline of 30 per cent on the prior year, but pre-tax profits remained steady at €52 million. ITX Fashion paid corporation tax at a rate of 12.1 per cent, and is sitting on a cash pile of some €109 million, up from €88 million in the previous year. The unit employs 21 people and it paid a dividend of €4.8 million during the year.

However, the future of the Dublin operation, which was hit by tax avoidance claims in 2011, given the differential in Ireland’s 12.5 per cent rate and the rate in Spain, now looks unclear.

In 2012, to address these tax issues, Inditex said it would move its European ecommerce business from Ireland back to Spain, and yesterday the company confirmed to The Irish Times that all the group’s European ecommerce platforms are now based in Spain.

While ITX Fashion, which is a subsidiary of a Dutch company, Zara Holding II BV, outlined plans in its accounts to expand in its current e-commerce markets and in any new markets, as soon as is “technically feasible”, Inditex said that its plan is to move these ecommerce platforms to its respective markets.

At present however, many of these platforms operate as subsidiaries of the Dublin company; ITX Fashion’s subsidiaries include ITX USA, ITX Mexico, ITX e-commerce (Shanghai) and ITX Korea for example.

Company filings also show that Inditex also has a Dublin based reinsurance company, ITX Re, related to insurance business written by the Inditex group. It reported a pre-tax profit of €24m on gross premiums of €34 million in the year to January 31st 2015.It paid tax at a rate of 12.5 per cent on these profits.