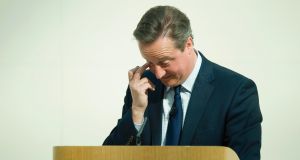 British prime minister David Cameron: the Panama Papers revelations put pressure on him because of his late father Ian Cameron’s use of an offshore company. Photograph: Leon Neal/Pool

World leaders gather in London on Thursday for an anti-corruption summit as the fallout from the Panama Papers revelations continues to prompt calls for change in relation to offshore secrecy.

Transparency International described the Panama Papers revelations as “one of the biggest corruption scandals this century” and said they should strengthen leaders’ resolve to take concrete action.

A letter from a group of 300 top economists, including Thomas Piketty, called on those attending the summit to “make significant moves towards ending the era of tax havens”. The letter, organised by Oxfam, is signed by 13 Irish economists.

The Panama Papers revelations put pressure on British prime minister David Cameron because of his late father Ian Cameron’s use of an offshore company. It also drew global attention to the role of British Overseas Territories in the secretive world of tax havens.

Data includes the names of directors and shareholders. More than 200 Irish addresses appear in the data, which can be accessed on IrishTimes.com.

There is nothing illegal about using offshore companies and there is no suggestion intended that the people named in the files were involved in any illegality.

The massive leak revealed that world leaders, associates of world leaders, sanctions busters and known criminals were among those holding assets in offshore locations.

US economist Jeff Sachs said tax havens do not just happen. “These havens are the deliberate choice of major governments, especially the UK and the US, in partnership with major financial, accounting and legal institutions that move the money . . . The abuses are not only shocking, but staring us directly in the face. We didn’t need the Panama Papers to know that global tax corruption through the havens is rampant, but we can say that this abusive global system needs to be brought to a rapid end.”