Who got the Walmart money? 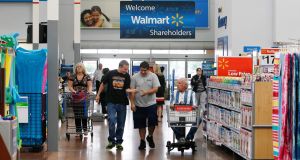 In what’s been a closely guarded family secret, the late Walmart heir John Walton gave half of his then-$17 billion estimated fortune to charitable trusts and a third to their only child, Lukas Walton, now 29, an analysis of court documents reveals. His wife Christy got the rest.

Ever since Walmart heir John T Walton died 10 years ago in a plane crash, it has been widely assumed that he passed the bulk of his vast estate to his widow, Christy.

Turns out that was very wrong. In what’s been a closely guarded family secret, Walton gave half of his then-$17 billion estimated fortune to charitable trusts and a third to their only child, Lukas Walton, now 29, an analysis of court documents reveals. Christy got the rest.

The filings, unsealed by a Wyoming court, mean that Christy’s fortune as previously calculated has taken a big hit - from $32 billion before the court records were unsealed to about $5 billion now.

She’s unlikely to ever again reach her former designation as America’s richest woman, which she held until last month. But her loss is Lukas’s gain. Though little-known outside of a few scattered social media posts, he becomes the 103rd- richest person in the world, with about $11 billion, according to the Bloomberg Billionaires Index.

That makes the grandson of Walmart founder Sam Walton $5.5 billion richer than his 66-year-old mother, and wealthier than Eric Schmidt and John Paulson. The Waltons declined to comment.

“Lukas Walton is an entrepreneur involved in a variety of investment and philanthropic activities,” Kiki McLean, a spokeswoman for the Walton family, said in an email.

John Walton, the second of four children of Sam and Helen Walton, left an estate that included gold bars, a catamaran and $100 million in cash, according to the documents. Most valuable was his 20 per cent interest in Walton Enterprises, the family’s main investment entity.

As a result of that holding, Lukas may wield a key vote in the closely held entity, which together with another family trust controls a 50.2 per cent stake in Walmart Stores.

At more than $100 billion, the Waltons – siblings Jim, Rob and Alice, as well as Lukas and Christy – can claim one of the world’s largest family fortunes, according to the index.

“There’s no other public company of this size that I am aware of where a family has such a big stake,” said Brian Yarbrough, a consumer research analyst at Edward Jones in St Louis.

As a young child, Lukas was diagnosed with cancer. His mother attributes his survival to an organic food diet, according to an interview she gave to the San Diego Union-Tribune in 2008. Lukas graduated with a bachelor’s degree in environmentally sustainable business from Colorado College, according to a letter from his high school.

His college directory lists his graduation year as 2010 and his work history as an unspecified position at the Walton Family Foundation. He has worked for venture capital company True North Venture Partners, according to local press coverage of the commencement speech he gave at his high school in 2011.

The fate of his father John’s stake was unknown ever since a judge in Teton County, Wyoming, sealed the estate in September 2005 at the request of the family. Walton had died three months before, at age 58, when the ultra-light aircraft he was piloting crashed shortly after taking off from Jackson Hole Airport.

The documents reveal the painstaking seven-year-long legal undertaking to distribute the estate and underline the family’s extensive use of trust structures to minimise the amount of tax they pay.

His father’s will directed that Lukas be given the right to vote the estate’s general and limited partner units in Walton Enterprises. That could make him one of the first of the family’s third generation to be a voting shareholder in the controlling entity, if he decides to exercise his voting power.

That structure is in keeping with Sam Walton’s vision to minimise estate taxes while keeping the family’s control of the company unified. In 1953, he put his stock in a trust that gave each of his children a 20 per cent stake in the business, leaving the remainder for himself and his wife.

“The principle behind this is simple: the best way to reduce paying estate taxes is to give your assets away before they appreciate,” Sam Walton explained in his autobiography.

When John Walton married Christy Tallant, he had a net worth of about $195 million, according to a 1982 premarital agreement that was unsealed this month by the Wyoming court.

John Walton’s own bequest appeared to take advantage of several tools to reduce taxes on the estate. The estate was appraised at $6.6 billion, according to the documents. Yet, the Walmart shares controlled by John Walton’s estate would have had a market value of $17 billion at the time of his death if he hadn’t given any of his holdings away during his lifetime, according to data compiled by Bloomberg.

That discount in part reflects the holding structure the family has established for their shares, according to John Anzivino, head of the estates and trust division at Miami-based accountants Kaufman Rossin. “The company may have all kinds of restrictions, such as profit allocations and lack of control, which reduce its value from the market value of the stock itself,” he said.

In Bloomberg’s analysis, the net worth of Christy and Lukas is calculated using the retailer’s stock price. This structure saw the estate estimate its tax liability to be about $1.4 billion, only 21 per cent of the appraised value.

The top federal estate tax rate was 47 percent in 2005, according to Anzivino. This is the rate on the portion passing to the child subject to estate tax in excess of the exemption of $1.5 million.

Christy, as the surviving spouse, gets her share estate tax-free and the gift to the charitable trusts are estate tax-free. Charitable Trusts John Walton’s will split the estate into two parts. Half of the estate was placed into tax-friendly vehicles known as charitable lead annuity trusts, or CLATs, of which Lukas is the only beneficiary.

For the other half, Walton directed that two-thirds was to be held in trust for Lukas. The remainder went to his widow. The charitable trusts make annual non-taxable payments under IRS guidelines to the Walton Family Foundation charitable arm until 2036.

If its investments outperform certain benchmarks, whatever is left at the end goes to Lukas without any tax bill. In Bloomberg’s calculation, Lukas isn’t credited with the portion of the estate held by the charitable trusts. If he were, his net worth would be as high as $25 billion, according to the Bloomberg.

Depending on future performance, Lukas may not receive anything from these CLATs, according to an adviser for the family who asked not to be named as the details are private.

It was John Walton’s intent to leave half his estate to charity, the adviser said. Currently the trusts are accumulating assets faster than they’re giving them away, according to an analysis by Bloomberg based on the fair market value of these trusts as reported in annual IRS filings.

That suggests the underlying assets could ultimately pass to Lukas in 21 years. Christy’s share of her husband’s estate – about 17 per cent, according to the unsealed will – includes 500,000 Walmart shares, personal effects, interest in various ranches and other sundries.

A philanthropist, she donated the Victorian house in National City, California, where she had lived with John and Lukas, to charity in 2006. “The Waltons were always very good at being very philanthropic to youth programs, but they always did it anonymously,” National City’s Morrison said.

The documents unsealed by the court reinforce how close the family remains in business, more than two decades after Sam Walton’s death. They show loans to the estate from Sam’s three surviving children that enabled it to meet its obligations and prevent any loss of control at the family retailer. It’s a setup not likely to be lost upon the youngest Walmart billionaire.

If Lukas is ever tempted to break the tradition of family rule, his grandfather left some stern advice for his offspring. “If you start any of that foolishness, I’ll come back and haunt you,” Sam Walton warned in his book. “So don’t even think about it.”

‘The Brexit loan scheme was a great initiative and it has helped us continue to grow’ 05:58
Hospitality industry hoping it isn’t afflicted by US coronavirus fears 05:23
‘The only time apartments were viable was in . . . Ballsbridge, Killiney and Dalkey’ 05:08
Why Irish banks are now looking beyond vulture funds on problem loans 05:04
We have little chance of building enough homes to meet election promises 05:00

1 Corona beer firm reeling after 8% slide due to coronavirus
2 Pharma giant AbbVie warned Government against ‘unfair’ €572m tax bill
3 Life as a Facebook moderator: ‘People are awful. This is what my job has taught me’
4 ‘The only time apartments were viable was in . . . Ballsbridge, Killiney and Dalkey’
5 Why Irish banks are now looking beyond vulture funds on problem loans
6 Flight attendent seeks High Court injunction against Aer Lingus
7 How well paid do you think you are? Here’s how to work it out
8 Survey finds shift from cash to its virtual equivalent now at tipping point
9 We have little chance of building enough homes to meet election promises
10 High time: Netherlands moves to clean up absurd cannabis policy
Real news has value SUBSCRIBE