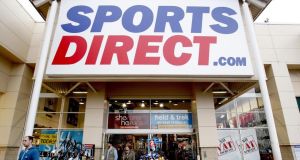 A Sports Direct shop at the Speke Retail Park, Liverpool. The use of zero hours contracts has been growing in recent years but the numbers involved have been vastly underestimated. Photograph: Peter Byrne/PA

WHEN Sports Direct revealed last month that its store staff were to share £135 million in bonuses after a record year, the sportswear retailer was hailed as a model employer.

At last, ordinary workers were being allowed a taste of banker-style bonuses, with life-changing sums being paid out to those who served behind the counter. A shop assistant on £20,000 a year was in line for shares worth £70,000, with those on higher salaries receiving even more.

The headlines and editorials were unstinting in their praise; trebles all round for the Sports Direct spinmeisters.

Selective information is a dangerous game, however, and within weeks Sports Direct has gone from hero to zero with the revelation that 90 per cent of its staff – 20,000 part-time workers – are ineligible for the bonuses because they are employed on “zero hours” contracts.

Sports Direct, Britain’s biggest sports retailer, initially bore the brunt of mounting anger over the use of these controversial contracts, under which employees have no guarantee of work. But it has since emerged that it is not the only offender – fast food chain McDonald’s has almost 83,000 of its UK workforce on these contracts, 90 per cent of its total staff.

A raft of other companies have now admitted to employing large numbers of staff on zero hours contracts, particularly in the traditionally low-paid retail, leisure and catering sectors. There’s even a royal connection – the 350 part-time workers employed to show tourists around Buckingham Palace in the summer have no guaranteed work.

For the employer, zero hours contracts offer flexibility – if business is slack, they do not have to pay their part-time workers. Some employees no doubt like the flexibility too but for most, it’s a financially precarious existence, not knowing from one week to the next – or even from day to day – how many hours they will work and how much they will be able to bring home.

There is no sick pay, limited holiday pay and no redundancy pay. Budgeting becomes impossible, as does taking out a loan or mortgage as regular work cannot be guaranteed. In some cases, workers are put on stand-by in case they are needed but told they cannot work elsewhere as they must always be available.

There is concern too that such contracts are being used to keep staff in line, with those deemed “troublemakers” denied hours by the employer. Unions have branded the contracts “Dickensian”, a throwback to the casual employment of Victorian Britain, and say the vast majority of workers are on them because they have no choice.

The use of zero hours contracts has been growing in recent years but the numbers involved have been vastly underestimated. Official government numbers are woefully outdated – until recently the Office for National Statistics estimated that only around 200,000 workers were on these contracts. That figure has been raised by 25 per cent to 250,000 but is still well short of the true number. For example, research from the Chartered Institute of Personnel and Development (CIPD) suggests that as many as one million people in the UK are employed on zero hours contracts. The CIPD highlights their use in education and healthcare as well as hotels, catering and leisure.

It’s not just the low-paid or unskilled worker. There are examples of doctors and college lecturers on zero hours contracts – and even reporters for Hansard, who provide the record for the Houses of Parliament. The unions have estimated that 300,000 people in the care industry alone are employed on these terms.

Business secretary Vince Cable is in favour of the flexibility offered by zero hours contracts but has expressed concerns that some staff are being exploited. He is conducting a review of their use, although Labour shadow business secretary Chuka Umunna has already branded it inadequate, contrasting it with the in-depth investigations into red tape on behalf of the business lobby.

Now under growing pressure to launch a full-scale inquiry, Cable earlier this week ruled out a complete ban but has indicated there could be new legislation to protect employees, particularly where they are prevented from working elsewhere.

Sports Direct can have had little idea when it trumpeted its staff bonuses for favourable headlines last month that it would blow up into a row over rights for part-time workers. New zero hour employers are emerging daily and the publicity generated by the row looks certain to see some form of clampdown on their use.

That’s at least some sort of bonus for those employed by Sports Direct with no guarantee of hours – and the other one million zero hours workers in Britain.