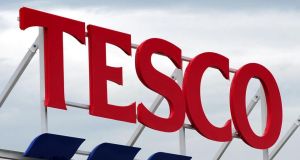 Andrew Yaxley, chief executive of Tesco Ireland, told an industry conference on Tuesday it planned to remain “humble” in the Irish market, as he laid out details of measures it hopes will kick-start a return to strong growth.

Mr Yaxley, who was appointed last March following a group-wide management shake-up, indicated it would expand the number of Tesco Express convenience stores in the Irish market, currently about 30.

He also said it would push its private label products and hinted it would further develop its online shopping and home delivery service, as he addressed the Checkout magazine conference on retailing, in Dublin’s Mansion House.

After a torrid few years in the Irish market due to the German discounters, Aldi and Lidl, Tesco returned to slight growth in the latter half of 2015, although SuperValu holds its old crown as the biggest grocer by market share.

Tesco Ireland, he said, also must “protect and strengthen its balance sheet”.

“Our business here had become so complex, and that complexity costs too much money. We need a simpler operating model. It is also important for Tesco to be humble, especially in Ireland.”

He said its supermarkets were now focusing more on fresh foods, such as bakery items and meats, reversing a drift in recent years into more general retailing such as clothes and homewares.

“It will be fresh food first from now on, and only then will we support some of our shops with general merchandise, and only if it is the right-sized shop.”

Its Clubcard reward scheme has been “used too much as a promotional tool”, he said, and would be revamped to make it “more of a thank you for customers”.

Tesco plans to run “fewer, simpler” promotions, the sheer volume of which he said had confused shoppers, and it was also reducing sales of multipack items by 35 per cent: “We run half-price offers instead.”

He said the Irish unit had among the weakest sales of Tesco own-brand products in the group and customers had “fallen out of love” with its private labels. Mr Yaxley said it had put in an extra 1,000 own-brand product lines into its stores.

The company is embroiled in a row with its longest-serving staff members, whose contracts and agreed working conditions it has unilaterally proposed to change. It is engaged in discussions with trade unions, which slammed the proposals as punishment “for its most loyal” staff.

1 Ryanair and Eir the worst for customer service during Covid crisis
2 Fair deal? Family at odds with hospital and each other not so sure
3 What to consider if older person or loved one needs care at home
4 ‘Essential’ retailers risk a firestorm if they exploit the closure of the ‘non-essential’
5 Glenveagh attracts growing hedge-fund interest
6 Tinnitus group Neuromod raises €10.5m for expansion
7 PlanNet21 eyes further acquisitions after buying rival eCom
8 Level 5 restrictions risk pushing economy into double-dip recession
9 INM inspectors write to former directors in ‘inside information’ inquiry
10 EU agrees to intensify talks on post-Brexit deal
Real news has value SUBSCRIBE