Stores in Republic spared as Tesco takes on discounters 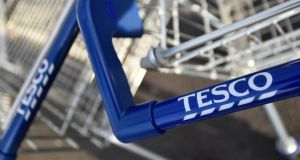 Tesco said it would reduce its capital expenditure for next year to £1 billion, from no more than £2.1 billion this year and cut costs by £250 million a year

Tesco has confirmed there will be no store closures in the Republic of Ireland as the group plans to sell assets and cut costs to fund lower prices in-store as part of its plan to fight back from the biggest crisis in its 95-year history.

Although there will be extensive job losses in the UK, Tesco Ireland said no further redundancies were planned here beyond a net 90 losses following a voluntary redundancy scheme for 350 night staff.

About 260 of these will be rehired for day-time work as Tesco looks to boost customer service, leaving a net loss in Ireland of 90 jobs.

Dave Lewis, Tesco’s group chief executive, also announced yesterday that the Irish unit, which will comprise 149 stores by next month, will be joined to the British operation, having previously been part of its European division.

Analysts said this indicates that most of the customer service and supplier initiatives announced in the UK yesterday would eventually take effect in Ireland.

While its corporate head office in Britain is expected to face cuts as Mr Lewis forgoes administration to focus on service, Tesco Ireland said it had no specific plans to make changes to its head office in the Republic.

In its latest trading statement Tesco said it intended to close 43 unprofitable stores across the UK but it has not specified if any of these stores are in the North.

Like-for-like sales at Christmas were down 0.5 per cent, compared with a 4.4 per cent fall in the previous three months. In Ireland, sales over Christmas fell 5.5 per cent.

The group said it would reduce its capital expenditure for next year to £1 billion, from up to £2.1 billion this year.

It will also explore the sale of its Dunnhumby data business, not pay a final dividend and may close its defined benefit pension scheme in the UK.

Tesco is losing sales to discounters Lidl and Aldi. The group brought in Mr Lewis in September to revive its fortunes but the former Unilever executive was immediately put on the back foot by its financial difficulties.

The group announced price cuts to hundreds of branded products in the UK.

The British multiple also confirmed that its plans to develop super-stores in Armagh and Carryduff would no longer go ahead. – Additional reporting: Reuters