Maximum shops can be charged for such transactions cut to 0.1% 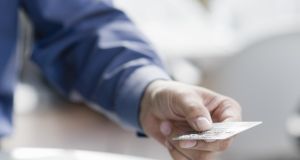 A reduction in the amount retailers have to pay for transactions involving debit cards has been welcomed by the sector.

A reduction in the maximum that shops can be charged for such transactions to 0.1 per cent was announced by Minister for Finance Michael Noonan. An EU directive has imposed a 0.3 per cent maximum charge for credit and debit cards.

Mr Noonan said the changes could save retailers up to €36 million in fees every years and that it was important that the savings were passed on to consumers.

“Ireland is a very cash-based society, which involves costs in terms of sourcing the cash and security,” said Thomas Burke, of Retail Ireland. “Hopefully this will lead to an increase in card usage for retailers, and a reduction in costs.”

Mr Noonan said he wanted to support retailers and other merchants by reducing costs and incentivising electronic payments.

“Payments are the lifeblood of a modern economy and the National Payments Plan aims to modernise our payment practices and help Ireland take full advantage of modern payment methods,” he said.

Improvements in mobile technology meant that the majority of service providers and sales people could now offer their customers the option of paying by card. This had benefitted retailers, consumers and the wider economy.

However, retailers in Ireland faced excessive fees for accepting card payments and this needed to be addressed, he said.

The new fee regime he was announcing would be monitored closely to ensure it led to lower prices.

The transaction limit on contactless payment cards is being raised from €15 to €30 on the 31st of October. “Together with the reduction in bank fees, retailers should now bring an end to practices such as requiring a minimum payment for card use,” Mr Noonan said.

To further encourage and incentivise greater usage of card payment by consumers the €5 stamp duty on debit and ATM cards is to end from January 1st, 2016, and replaced with a 12c charge per ATM transaction. There will be no charge for debit card transactions.

“No consumer will be lose out as a result of this change as the stamp duty will be capped at the existing levels of €2.50 or €5 depending on card type,” Mr Noonan said.

Mr Burke described the changes as innovative and that the fees as they exist are extimated to cost Irish businesses €40 million a year.

“Eliminating the barriers to the proper functioning of a modern, dynamic and competitive payments landscape will help support the right conditions for growth, investment and job creation,” he said.

Encouraging consumers’ use and retailers’ acceptance of electronic transactions over cumbersome and costly cash would save money and time, as Ireland continued its transformation to a cashless society.