Opinion: Rehab’s board might want to reflect on whether the reluctance of chief executive Angela Kerins to disclose her pay is advisable 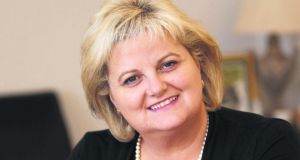 “The salary of [Rehab] chief executive Angela Kerins is already something of a cause célèbre.”

The growing controversy over how much the chief executives of companies and institutions that operate at one remove from the public service are being paid shows little sign of abating. If anything, the interest of the public and the public interest are intensifying as the details of what transpired at the Central Remedial Clinic come out into the open.

The pressure for transparency will only grow and many other organisations will come under pressure to disclose how much their senior executives are paid and what other remuneration they receive – and crucially, how it is funded.

One such organisation is Rehab, the Sandymount-based provider of education, training and employment for people with disabilities. It is big organisation, employing 3,800 people across Ireland, England, Scotland, Wales, the Netherlands and Poland. Its annual turnover in 2012 – the last year for which accounts are available – was €183 million and it reported an operating surplus of €1.5 million.

Somewhere in the region of €50 million of its income comes from the State, most of it via the HSE. It also raised about €18 mil- lion through fund-raising and its own lottery.

The salary of its chief executive Angela Kerins is already something of a cause célèbre, having been disclosed by Brian Kerr, the chairman of the organisation, in April 2011 following what he described as “seriously inaccurate, wild and unfair speculation in the media”.

Salary on the agenda
Kerins put her salary firmly back on the agenda two weeks ago when she refused to discuss it when quizzed by Gavin Jennings of RTÉ’s Morning Ireland. She had gone on the programme to discuss a new contract that Rehab had signed in Saudi Arabia “in the presence of the Taoiseach”, but she could hardly have been surprised to be asked about her salary.

She attempted to draw a distinction between Rehab and the other organisations then in the news – the CRC and the St Vincent’s Hospital Group. She pointed out that 60 per cent of its activities were in the commercial arena and “we do have a number companies within Rehab group that work with the Irish Government and the HSE”.

She made a point of saying that Rehab was not on the list of agencies being asked by the HSE to disclose the remuneration of the senior staff .

All of this is true, but there is more than a little of wanting the best of both worlds about it . The biggest hole in Kerins’s argument is the one that Rehab itself created when, in 2009, it tried to cut the pay of its employees by between 5 per cent and 15 per cent. This was in line with the pay cuts implemented in the public service as part of the measures to address the budget crisis.

Siptu, which represented 750 workers at Rehab, objected on the basis that Rehab workers were not public servants and thus the measurers did not apply to them. It also argued that there were no apparent financial problems at Rehab.

Rehab argued, however, that it had “clear links to public service rates of pay and pay movements” and also that “the group is fully dependent on funders and it was these funders who demanded the wage cuts in line with those in the public sector”, according to the recommendation of the Labour Court.

The Labour Court agreed with Rehab that “there is an established de facto alignment with the public sector for the purpose of pay adjustment”, but ruled that the organisation had failed to make the case for a pay cut and called for an independent examination of the company’s books.

Black public mood
It is somewhat disingenuous of Rehab to hold itself out as a publicly funded extension of the public service when it wants to cut the pay of the its workers but characterises itself as a private commercial organisation when asked to disclose how much it pays its chief executive.

It may be correct and it may be legal but it does not chime with the public mood which grows blacker by the day.

The board of the organisation might want to reflect on whether its chief executive’s reluctance is disclose her pay is advisable, let alone justified.