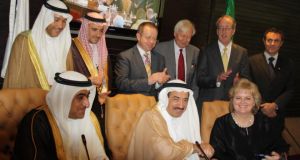 The Rehab Group is to expand into the Middle East and has set up a subsidiary in Saudi Arabia, which is expected to create jobs for Irish workers over the next three years.

Rehab chief executive Angela Kerins last week signed a strategic partnership agreement with Global Dimension for Education and Training, a member of the Almojel Group of Companies, to deliver education and training services to people with disabilities and special needs in the kingdom.

Ms Kerins said the organisation would focus initially on its expansion in Saudi Arabia, but may consider further expansion in the region. “Saudi Arabia is the first country in the Middle East that the Rehab Group is working with and we are privileged to have the opportunity to offer our expertise to support the improvement of employment prospects for disabled people in the kingdom of Saudi Arabia.”

Independence
The signing was attended by Minister of State Ciarán Cannon and Irish Ambassador to Saudi Arabia Dr Niall Holohan. While the training services will be provided with a subsidiary of the Almojel Group, one of Saudi’s oldest companies, it’s understood the Rehab Group has been allowed to establish its subsidiary independently in Saudi Arabia without a local partner, which is unusual for foreign businesses setting up in the kingdom.

Rehab would not say how many jobs will be created for Irish workers in Saudi Arabia and support services in Ireland, but said it would be advertising for new positions in the coming months and there would be “significant opportunities” for work in the kingdom. Sources in Saudi Arabia expect the deal to create more than 300 jobs over the next three years.

Recognition
Saudi Arabia has a population of 27 million people, of which six million are expatriate workers. Of the local population, experts estimate that as much as 15 per cent of the population suffers from some level of disability or special need. While there are few options for work or training for people with disability, there is a recognition that this needs to change.

According to Ms Kerins there was high-level support for the company in the kingdom. “Disability is not a contentious issue in Saudi Arabia, but isn’t a very visible issue at the moment. There is willingness to affect change in Saudi Arabia and everywhere we’ve gone there has been a positive reaction to our presence and our mission.

10 Sorry, Domhnall Gleeson, I don’t want to chat to you anymore