Company has invested in expansion plan that includes stores with lines for men, older women and children 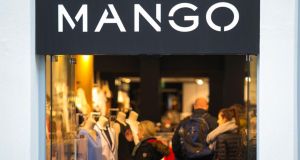 In July, Mango cut its revenue forecast for 2017 by around a third. Photograph: Krisztian Bocsi/Bloomberg

Spanish fashion retailer Mango reported an 11 per cent fall in annual profit on Tuesday after investing in an international expansion plan including large-scale stores with lines for men, older women and children.

The unlisted chain, which competes with Inditex brands such as Zara and Swedish peer H&M, cut forecasts for the next four years in July when it said it would take longer than expected to meet sales targets for new lines.

The company, which is family owned and has stores in more than 100 countries, said net profit came in at €107 million on sales up 9 per cent to €2 billion. Earnings before interest, tax, depreciation and amortisation (EBITDA) fell 3 per cent to €223 million.

Mango in July cut its revenue forecast for 2017 by around a third after it said new brands, such as its Violeta concept for older women which offers bathing suits to evening gowns in sizes up to a European 52, would take longer to get a following.

Mango, known for hiring celebrities including Hollywood actress Scarlet Johansson and French soccer star Zinedine Zidane for its advertising campaigns, opened 43 stores with minimum floor space of 800 square metres ( in 2014 and aims to nearly double that to 75 openings in 2015.

Online sales now account for 9 per cent of the total, the company said, with Internet sales enabled in 12 new countries in 2014. Mango will expand its online offering into South America, Asia and Africa in 2015, it said.

The company will invest €300 million in new openings and logistics this year, it said in a statement.