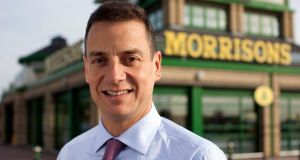 Shares in the supermarket chain jumped more than 4 per cent after news of Dalton Philips’s departure, a brutal verdict from the City on the Irish man’s time at the top. Photograph: PA

Dalton Philips, the globetrotting Irish retail executive, will soon be heading back to his homeland to reflect on the future after being sacked as chief executive of UK supermarkets chain Morrisons.

His ousting, after five years in the top job, became inevitable after Morrisons suffered a 3.1 per cent fall in underlying sales over the crucial Christmas period, the worst performance among the major UK supermarket chains.

Morrisons also disclosed yesterday that it is to close 10 loss-making stores with the loss of about 400 jobs.

Shares in the supermarket chain jumped more than 4 per cent after news of Philips’s departure, a brutal verdict from the City on the Irishman’s time at the top. Morrisons, which is also bringing in a new chairman, ex-Tesco man Andrew Higginson, has now started the search for an external candidate for the chief executive role.

Morrisons remains one of the retail sector’s basket cases, but there was some sympathy for the 46-year-old Philips among analysts and journalists. He inherited a mess of a company from the previous chief executive, Marc Bolland, who is currently struggling to make a difference at Marks & Spencer. Indeed, speculation is rife that it won’t be too much longer before Bolland suffers the same fate there.

While Bolland can be blamed for failing to take Morrisons online, and for neglecting the rapidly growing and lucrative convenience store sector, Philips must take responsibility for failing to act swiftly enough to rectify the previous regime’s mistakes.

But Morrisons was the first of the major supermarket groups to respond to the growing threat of the discounters, Aldi and Lidl, with a series of price cuts last year. And there were signs, in yesterday’s trading statement, of some improvement in recent weeks. The 3.1 per cent slide in sales over the six weeks to 4 January was not as bad as the 3.8 per cent the City had feared, and was an improvement on the near-7 per cent drop suffered in the previous quarter.

But the figures are still dire and, amid signs that things may well get worse before they get better, Philips’s position had become untenable. Shareholders were also restive and the Morrisons chief executive inspired one of 2014’s more memorable quotes, from the group’s retired former chairman, Sir Ken Morrison. Pointing out at the annual meeting that he now owns a herd of 1,000 bullocks, Morrison said: “Having listened to your presentation, Dalton, you’ve got a lot more bullshit than me.”

Philips was informed of his fate by the board on Monday evening and has agreed to stay on until the year-end results in March. He will receive a year’s salary – £850,000 – as compensation and may also be in line for bonus payments.

His departure means three of the Big Four supermarket groups have switched chief executive in the past six months, with Mike Coupe taking over from Justin King at Sainsbury’s last July and Unilever’s Dave Lewis replacing the ousted Phil Clarke at Tesco in September.

Tesco’s problems have been well documented but the challenges for the new Morrisons boss are every bit as great, perhaps even greater. It lacks the scale of Tesco and, unlike its larger rival, has chosen to ditch its boss without having lined up a replacement.

In dispensing with Philips’s services, Higginson said Morrisons return to growth would best be achieved under a new chief executive. But it could take months for the right candidate to be identified. In the meantime, Tesco is slowly getting its act together and Sainsbury’s has just reclaimed its spot as the UK’s second-largest grocer from Asda.

He moved to Jardine’s supermarket arm in Spain before joining Walmart in Brazil and then Germany. In 2005 he returned to Ireland to run the Weston family’s Brown Thomas department stores, later moving to Canada to run the Weston business there.

Philips said his immediate plan yesterday evening was to head out “for a large beer” and, once his time at Morrisons is up, to return to Ireland to “reflect on what the future is.”