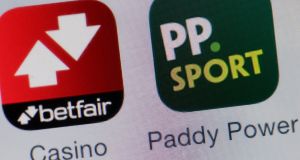 Paddy Power Betfair will be headquartered in Dublin. Photograph: Bloomberg

Paddy Power looks set to complete its near €10 billion merger with rival Betfair in a little more than two weeks after the Republic’s competition regulator cleared the transaction yesterday.

The two companies plan to create a global gambling business, Paddy Power Betfair, with €2 billion in revenue and a combined value of €9.4 billion at yesterday’s closing prices on the Dublin and London stock markets.

The proposal cleared its last regulatory hurdle yesterday when the Competition and Consumer Protection Commission approved the deal, saying it would not “substantially lessen competition in any market for goods or services in the State”.

Following the news, Paddy Power said it expected the merger to go through on February 2nd, subject to the British high court approving a scheme of arrangement, which Betfair is using to complete its part of the transaction, at a hearing the previous day.

Paddy Power Betfair’s shares are likely to be admitted to the London and Dublin stock exchanges, where they will begin trading, on February 2nd.

On January 27th the Irish bookie will announce details of the €80 million special dividend payable to its shareholders ahead of the merger.

ruling means the merger will take place almost two months ahead of the end of March, the deadline the two companies set when they announced details of the proposed deal last August.

Under the proposal, Paddy Power shareholders will own 52 per cent of the enlarged entity and Betfair’s owners will receive 48 per cent. The new company will be headquartered in the Republic and will have its main listing on the London Stock Exchange, with a secondary listing in Dublin. It will control online betting businesses in Europe, the United States and Australia, with more than four million customers, and will own about 600 betting shops in Ireland and Britain.

Joining forces will save the companies a combined €70 million a year, they say, once the merger is bedded down. There are likely to be job losses, although neither company has given a number.

The bookmaking industry as a whole is consolidating. Ladbrokes and Gala Coral are planning a £2.3 billion tie-in while GVC and Bwin.party look likely to do a £900 million deal.