& Other Stories to open on Grafton Street next month 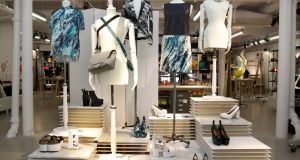 & Other Stories: Grafton Street building has been upgraded and fitted with a modern facade ahead of its opening.

& Other Stories, the upmarket fashion brand owned by Swedish retail giant H&M, is to open its new Dublin store just in time for the Christmas retail blitz, on Friday, December 9th. It’s the first Irish outlet for the brand, famed for its collaborations with designer Rodarte and singer Lykke Li.

H&M’s little sister, & Other Stories disclosed earlier this year that it would lease the former Awear store opposite BT2 (soon to be Victoria’s Secret) on Grafton Street. The building has been upgraded and fitted with a modern facade ahead of its imminent opening.

Owner Aviva Investors spent €5 million on the refurbishment and reconfiguration of the block which has 990sq m (10,656sq ft) of retail space at basement, ground and first-floor levels and 836sq m (9,000sq ft) of office accommodation on three upper floors.

It is understood there was intense competition from other leading international traders for the store, which is to be rented at €925,000 per year.

& Other Stories is expected to carry a full range of women’s clothes, shoes and accessories at its new Grafton Street outlet, all noted for their distinctive design at affordable prices.

H&M also owns the Cos brand, which operates in Ireland via a store on Wicklow Street and in outlets of Brown Thomas.

Meanwhile, Victoria’s Secret, one of the US’s most famous women’s lingerie companies, is set to replace BT2 in one of the most prominent stores on Dublin’s Grafton Street, across the lane from & Other Stories.

1 Am I crazy to consider switching to an Ulster Bank mortgage?
2 Irish tech company Asavie acquired by Nasdaq-listed Akamai
3 PTSB plays down Ulster Bank talk as it sells €1.4bn of loans
4 How much state pension will I get next year?
5 Up or down – how much is your Local Property Tax this year?
6 Asian shares slip as surging Covid cases weigh on global economy
7 Brexit to curb services trade with UK, accountants group warns
8 Tesco takes to the skies with home delivery by drone
9 Insurers to continue forbearance for customers hit by Covid
10 Brexit and Covid force consumer sentiment to lowest level
Real news has value SUBSCRIBE