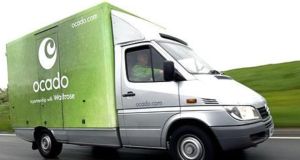 Online grocery group Ocado is set to make its first annual profit since being set up by three former Goldman Sachs bankers in 2000.

It’s taken almost a decade and a half but, at last, online grocery group Ocado is set to make its first annual profit since being set up by three former Goldman Sachs bankers in 2000.

Chief executive Tim Steiner, the only member of the founding trio still with the group, yesterday reported a swing into the black at the half-year stage, with profits of £7.5 million (€9.4 million) replacing a loss last time of £1 million. Sales for the six months to mid-May were up almost 16 per cent, to £442 million, boosted by the group’s recent £210 million distribution deal with Morrison’s.

Bears of Ocado, which floated on the stock market in 2010, have never been convinced of its business model, so proving the doubters wrong should have sweet for Steiner.

But instead he saw Ocado’s shares slide by almost 5 per cent as the market fretted about the impact of the grocery price war on the group. And although Steiner said the link-up with Morrison’s was “ramping up smoothly”, shares in the Northern-based supermarket chain were also dragged lower.

Reflecting the cautious outlook shared by most major food retailers, Steiner highlighted increased price competition being faced by the sector, led by the traditional supermarket retailers, as the no-frills discount chains eat into their market shares. While the online grocery market continues to outperform its bricks and mortar competitors, its growth is also suffering from subdued consumer spending.

Ocado and Morrison’s weren’t the only shares on the slide in the grocery sector. There were losses, too, for Tesco and Sainsbury, as the latest monthly market share figures from research firm Kantar Worldpanel underlined the inroads being made into the market by the German discount chains, Aldi and Lidl.

Ocado’s fate is still very much tied up with that of Waitrose, the upmarket supermarket chain owned by the John Lewis Partnership. Ocado delivers Waitrose products but Waitrose is expanding its own delivery service and, at some stage, will no longer need Ocado.

Steiner has high hopes to clinch other distribution deals, particularly with overseas retailers. It plans to start building a third distribution centre this year, at a cost of £80 million and due for completion in 2015. All that’s a long way off in an industry gripped by a price war and it will take more than an annual profit for the bears to be convinced that Ocado has a sustainable and profitable future.

However, his vote of confidence may well dismay investors hoping for a swift return bid by rival drugmaker, Pfizer. The US group, which had its £69 billion approach successfully rebuffed by AstraZeneca in May, is barred from making a return offer for six months.

But talks could be resumed at the end of August –- which is what many of AstraZeneca’s shareholders want – if the Anglo-Swedish company were to invite Pfizer back to the negotiating table. That now seems highly unlikely, given Soriot’s investment: what boss would buy shares in his own company ahead of initiating takeover talks?

If not invited back, then the US group will have to wait until November until it is allowed to bid again.

Meanwhile the good news for Soriot is that he bought his shares on Monday at £43.45 a share and they closed last night at just under £43.70, making a profit of around £11,000. The offer from Pfizer, however, was worth £55 a share. Fiona Walsh is business editor of theguardian.com

1 BOI customers to be charged twice with bank fees on New Year’s Eve
2 Irish designer of Oxford vaccine : ‘I’ve never worked so hard in my life’
3 Covid-19 will worsen housing affordability, report warns
4 Being polite in work emails is more important than ever
5 Chris Johns: I think we are on the cusp of an economic boom
6 Irish boss of Qantas says Covid vaccines will be mandatory
7 Goldman Sachs advises NatWest on Ulster Bank review
8 Modern’chief executive officer offloads another $1.74m in shares
9 Irish whiskey and Irish cream to get special status in China
10 Microsoft to create 200 jobs at new €27m engineering hub in Dublin
Real news has value SUBSCRIBE