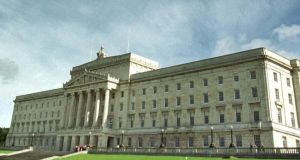 Northern Ireland Independent Retail Trade Association chief executive Glyn Roberts said that while the businesses community had been encouraged by the Stormont House Agreement it wanted to see it implemented and progress made on the final budget. Photograph: Bryan O’Brien

Retailers in the North enjoyed strong sales over the Christmas period according to initial feedback but local property charges will be a key issue for businesses this year, the Northern Ireland Independent Retail Trade Association (NIIRTA) has said.

The retail lobby group has also warned that outstanding political issues and impending changes to how councils are structured in Northern Ireland could impact heavily on business performance in the months ahead.

NIIRTA’s chief executive Glyn Roberts said: “Business rates are the top priority for NIIRTA in 2015. We face a perfect storm of challenges such as the rates revaluation, long term future of the Small Business Rate Relief Scheme and rates convergence of the 11 super councils.”

He said the revaluation of how property taxes are applied in the North last year had resulted in both winners and losers but there was no escaping the fact that some retailers would find themselves at a disadvantage because of the review.

Mr Roberts said while the businesses community had been encouraged by the Stormont House Agreement at the end of last year, it wanted to see it implemented and progress also made on the final budget.

Overall he said retailers in the North were positive about prospects for 2015 but they were was some wariness about the impact the new super councils, which are due to come into force on April 1st, could have on the local economy.

“These new super councils have the potential to be game changers in terms of local economic development, planning and regeneration. They must hit the ground running on April 1st with radical plans for boosting their local private sector and supporting the next generation of entrepreneurs,” Mr Roberts said.