Ding.com enables people in emerging markets who are working abroad to instantly send top up to mobiles back in their home country. 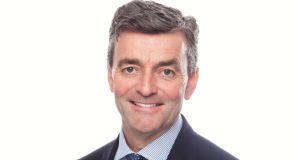 Ding.com enables people to send mobile phone credit top-up to anyone anywhere in the world.

Chief executive Mark Roden spent his early career in a variety of marketing roles after which he did an MBA at IMD, Switzerland. He then worked in management consulting for a number of years.

In 1991, Denis O’Brien asked Roden to join him in establishing a competitor to Telecom Éireann, Esat Telecom. He worked in several roles in Esat and ultimately led commercial operations until 1997.

In 1998, he established a calling card company called Torc Telecom. Following rapid expansion, it acquired the much larger World Telecom, which ultimately led to the receivership of both companies in April 2001. A few months later, Roden established Easycash, which introduced in-store cash ATMs in Ireland. In 2004, Ulster Bank/RBS acquired Easycash.

In 2006, following a chance encounter with an Indian worker in Dubai, Roden founded Ding.com (formerly Ezetop). The company’s HQ is in Dublin and it employs 200 people in technology, product and commercial operations.

Since its inception, Ding.com has delivered $600 million to more than 58 million phones. It transfers almost $1 million each day to mobile phones in emerging markets.

What was your “back-to-the-wall” moment and how did you overcome it? Our early consumer online service was targeted by credit-card fraudsters, which resulted in losses of $700,000 over four months. I appointed our head of payments to also take charge of fraud reduction and, over a period of months, he systematically implemented measures that resulted in significant fraud reduction.

What moment/deal would you cite as the “game changer” or turning point for the company? One afternoon I was in the office looking at our top-up transaction screen which shows live transactions being sent from senders to receivers. A few minutes later, the screen just lit up with thousands of top-ups flying endlessly from New York and Florida to Haiti.

At first, I thought it was a software malfunction, but in fact it was the January 2010 earthquake in Haiti as relatives in the US could not get through to their families back home.

Ding.com was the only way they were able to send top-ups through to mobile phones to be able to speak to them and see if they were alive. Overnight our volumes exploded and I realised the power of transferring top-ups. What is your biggest business achievement to date? Building our global network of 300 emerging market mobile operators – this has never been done before. It was a mammoth challenge because the mobile operators didn’t want to know at first because we were such a small company. Then we had enormous technical, legal, taxation and treasury obstacles, as well as the challenge of working with operators in some of the most difficult countries to do business in. The shoe leather and air miles to build relationships with these people have thankfully paid off.

Have you started to feel the effects of the economic upturn within your sector/industry? In many ways, we are a recession-proof service as people always want to stay in touch. That said, we are beginning to see higher average value transactions per customer, which is a good indication of improved spending power. Our service is not just about calling home, it’s a way of people abroad empowering family back home by instantly giving them access to data and other services on their mobiles that they otherwise wouldn’t be able to afford.