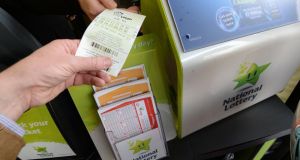 The franchise confirmed that a portion of its retail network was knocked out for about two hours ahead of Friday’s EuroMillions draw.

Retailers reported problems with machines in Dublin, Kildare and Waterford.

A National Lottery spokeswoman said it experienced difficulties between 2pm and 4pm and that a technical team investigating the source of the problem.

The lottery was last month forced to defer a weekly jackpot draw for the first time in its 28-year history when technical problems crashed ticket terminals across the country.

Up 3,500 terminals, equating to 95 per cent of the network, went out of commission for several hours as a result of the incident on February 3rd.

It is unclear if today’s issues were also caused by a similar outage. Telefónica could not be contacted.

Prior to the two outages this month, PLI had been in the spotlight over the performance of its new ticket terminals, which retailers claim were plagued with technical glitches.