Eason role is a new chapter in David Dilger’s career

Cantillon: chairman will use experience at Greencore to drive changes at the bookseller 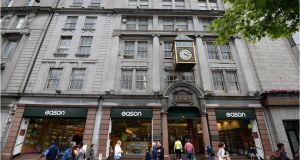 Dilger’s task as non-executive chairman at Eason will be to help its new managing director Liam Hanly consolidate the progress that has been made in recent years. Photograph: Dara Mac Dónaill

David Dilger is set to begin a new chapter in his career as non-executive chairman of Eason, the State’s biggest bookseller.

The circumstances would not have been of his choosing, coming into the role following the death in August of James Osborne. Nonetheless, he is an interesting choice at an important juncture in Eason’s history.

Eason’s former managing director Conor Whelan, who stepped down earlier this year, did much good work in restructuring and modernising its business model over the course of 7½ years, amid the challenges of recession and digital disruption.

But a lot remains to be done and, depending on your point of view, Dilger could be just the man to oversee such change.

There were many highs and lows during his 17 years in charge of Greencore up to 2008 but Dilger did manage to transform the company from being a sugar and flour producer into a convenience foods manufacturer and the world’s biggest sandwich maker.

While this transformation sat well with the markets, it’s fair to say that Dilger was not always popular with Greencore’s farmer shareholders, who complained bitterly over the years about their treatment by the company and the wind-down of Irish Sugar.

Dilger’s task at Eason will be to help its new managing director Liam Hanly consolidate the progress that has been made in recent years, while continuing to tweak the business model in the face of changing consumer habits, competition from digital rivals, and the impact of Brexit-related sterling weakness.

In an interview with The Irish Times in December 2007, he had this to say about his legacy: “A straight-talking veteran of Greencore said to me that I’m leaving the group in much better shape than I found it. That’s the way everybody would like to close the door.”

Eason shareholders would no doubt be happy with a similar outcome whenever he closes the book on his time as chairman of the company.

6 Sorry, Domhnall Gleeson, I don’t want to chat to you anymore