KPMG to create 200 permanent jobs and take on 300 graduates 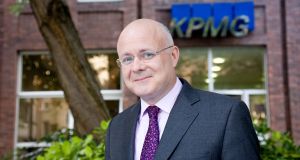 Professional services firm KPMG is to create 200 permanent jobs in Ireland over the next 12 months and will recruit 300 graduates.

The group, which has grown its Irish workforce from just more than 2,000 employees to 2,500 since 2014, said it was looking to fill roles in a number of areas including management consulting, risk consulting, tax, audit, restructuring and transaction services.

Managing partner Shaun Murphy said the company was targeting professionals at home and abroad to fill the positions.

“In recent years, we have seen a lot of evidence of Irish professionals working abroad looking to come home,” he said, adding that the group was seeing positive performances in many industry sectors.

“Ireland remains one of the world’s most attractive locations for mobile international investment and we are also seeing more and more Irish companies scaling successfully in international markets,” said Mr Murphy.

KPMG operates in 155 countries and has more than 174,000 people working in member firms around the world.

The company is the largest private-sector recruiter of new graduates in the country, with its next band of 300 graduates due to join the company in the autumn next year.

The survey found that financial services, IT and pharmaceuticals remained the most buoyant sectors for recruitment in August.

There were 20 per cent fewer jobs in the accountancy and finance sector when compared to the same point a year earlier, with a 40 per cent drop recorded between July and August, although Morgan McKinley said this was primarily driven by seasonal factors.

Ms O’Flaherty said the company had observed “a noticeable increase in demand for middle office functions within the funds and asset management market in Dublin, possibly as a result of the UK’s Brexit vote.

“It is still too early to estimate if this is a direct result of the Brexit vote and whether it is a trend that will continue,” she said.

“There is also increased demand for data scientists in the banking sector,” Ms O’Flaherty said.