Kenny opens himself to criticism with Berlin Primark visit 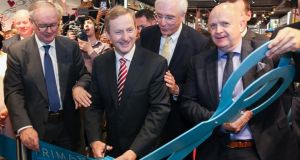 The Taoiseach’s decision to open Primark’s new store in Berlin last week was not an unqualified success. He managed to incur the wrath of many on social media who objected to him (i) opening a British shop (ii) wasting time and (iii) endorsing sweatshop labour.

The first allegation is a bit flimsy, but the second and third have some substance. Primark (or Penneys as we know it) is an Irish company, although it is owned by London-listed Associated British Foods.

How much Irish tax it pays on the £269 million in profit it made last year is a matter for its tax advisers and the Revenue Commissioners.

The accusation of time-wasting has to be seen in the context of the ambassadorial aspect of the Taoiseach’s role. Yes, he could have been swotting up for his meeting later that day with Angela Merkel but, at the same time, he was promoting a positive image of Ireland as the home of a low-cost fashion brand that has taken Germany by storm. Think Kerrygold, only you wear it.

And this is where the third and most serious criticism comes into play. It would appear that for every German going nuts about €3 T-shirts there is another one tut-tutting about the cheap labour behind them. Primark is particularly vulnerable in this regard because it used suppliers based in the Rana Plaza building in Dhaka, Bangladesh, which collapsed last year killing over 1,000 people.

Presumably the Taoiseach and his advisers took the view that there was more to be gained than lost by endorsing Primark. And it was up to the Germans to judge whether he was right.

If the all powerful Bild tabloid is any guide he got it wrong. It focused very heavily in its coverage on the crowds protesting about sweatshops and less on the crowds trying to get in and buy the clothes. Oops!