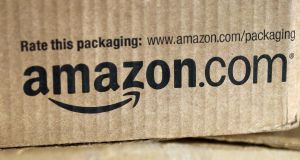 Amazon said exports from UK businesses on its marketplace website were on track to increase nearly 30 per cent this year to £1.8 billion. Photograph: Rick Wilking/Reuters

European consumers are cutting their shopping bills by ordering on British websites to take advantage of the weak pound, according to online retailers and delivery companies that have seen the number of parcels they send overseas soar.

Amazon said exports from UK businesses on its marketplace website were on track to increase nearly 30 per cent this year to £1.8 billion, a trend replicated at other internet retailers. Delivery companies also reported a rise in the number of parcels they collect from British warehouses to ship overseas.

DPD and UPS have both registered double-digit percentage increases in the number of British parcels they deliver to overseas addresses against comparable periods a year earlier.

Hermes recorded a 15 per cent jump since the vote for Brexit, and market leader Royal Mail said the decline in the number of parcels it sends abroad had slowed following the pound’s depreciation.

British bargains have been a recurring theme on consumer-oriented websites in European countries including France and Germany. Many products listed on UK websites are 10 per cent cheaper in euro terms than they were before Britain voted to leave the European Union on June 23rd.

While some global brands such as Apple have increased prices in the UK, others plan to hold prices steady until next year, when the hedging arrangements that have shielded many retailers expire – a delay that has created pricing disparities that international bargain-hunters have been able to exploit.

“We’re seeing a lot of orders from Ireland in particular,” said an executive at one UK-based shopping website, who pointed out that currency arbitrage has long been a pastime of shoppers on either side of the UK-Irish border.

Retail executives say that the rise of internet commerce has propelled a trend towards cross-border trade, even before the price gaps opened by the falling pound.

Amazon pointed to its introduction this year of a service that handles logistics for sellers who list their goods on all its European websites.

Still, the surge in international online shopping – along with a snap of cold weather and the resilience of the British shopper – could help explain an unexpectedly strong increase in retail sales in October.

The number of goods bought increased a higher than expected 7.4 per cent compared with a year earlier – the fastest growth in 14 years.