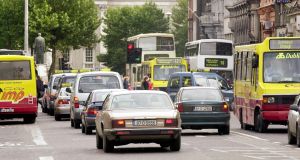 Cars in Dublin’s city centre: The big insurers in the Irish market have pushed up prices dramatically over the past two years, with premiums rising by some 25 per cent last year and further again this year. Photograph: Dara Mac Donaill

The insurance industry has denied that a lack of transparency on its part is driving up car premiums, instead citing factors such as high legal costs and the collapse of Setanta Insurance.

The big players in the Irish market have pushed up their prices dramatically over the past two years, with premiums rising by some 25 per cent last year and further again this year.

As many as 80 per cent of all claims lodged with the Injuries Board are settled outside of the process.

However, Insurance Ireland, the lobby group for the industry, denied a lack of transparency was pushing prices up.

In a statement, it said it had been lobbying for the past 18 months for actions to be taken to address the spiralling cost of claims and the consequent increase in premiums.

“We’re supportive of the role played by the Injuries Board . . . but the claims environment has changed and it needs new powers,” said chief executive Kevin Thompson.

“These include simple things like compelling claimants to provide loss of income information and to attend medicals,”

Mr Thompson called for awards to be benchmarked against international standards and pointed out that eight out of every 10 motor injury claims in Ireland were for whiplash.

Mr Thompson also highlighted the role of the collapse of Setanta Insurance more than two years ago.

Earlier this year, the Court of Appeal rejected an appeal by the Motor Insurance Bureau of Ireland against a High Court decision that it must pay out on 1,750 outstanding claims left in the wake of Setanta’s demise.

“As things stand, insurers are being asked to price a product to factor in the cost of a competitor failing. We can’t think of any other sector where this happens,” Mr Thompson said.