Frank Gleeson gets injunction against dismissal as CEO of Mercantile Group

Injunctions restrain the group from taking any disciplinary action against publican 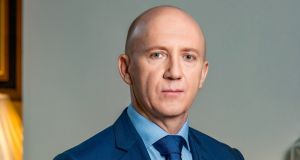 Mr Justice Paul Gilligan this evening granted an ex parte application (one side only represented) on behalf of Mr Gleeson for various interim injunctions against the Mercantile Entertainment Group Ltd.

The injunctions include orders restraining the company taking any steps to discipline Mr Gleeson or dismiss him on foot of findings made in a report commissioned by the company.

The judge has adjourned the matter to April 26th.

The Mercantile Group, which includes the Mercantile on Dame Street, the Green Hen in Exchequer Street and Whelans of Wexford Street, merged with Capital Bars in 2015. Capital included Cafe en Seine in Dawson Street and The George in George’s Street.

Under the merger, Mr Gleeson, Deerpark Drive, Castleknock, Dublin has a 30 per cent shareholding in Ardan Advisory, of which the Mercantile Entertainment Group is a wholly owned subsidiary. The remaining 70 per cent is owned by JT Magen (Capital Bars) LLC and Danu Advisory Partners Ltd.

The investigator, who completed the report at the end of March, had disregarded his own terms of reference and the report was “fundamentally and fatally” flawed, counsel said.

It was essential Mercantile be prevented from terminating Mr Gleeson’s employment based on the report’s contents, he added.

No witnesses were interviewed and no oral hearing was conducted in this matter and the report’s findings seemed to be based on what Mercantile provided to the investigator, counsel said.

His client, who had been on gardening leave since December, had had a number of matters put to him, which he responded to.

Mr Gleeson was informed an investigation was to take place and fears the group’s action will irredeemably damage his reputation and have devastating consequences financially.

As part of the shareholders agreement, Mr Gleeson would be dismissed as chief executive and his shareholding in Ardan would be reduced to 25 per cent in the event he was found to have engaged in any misconduct, counsel said.

In separate but related proceedings pending before the Commercial Court, Mr Gleeson alleges the majority shareholders are conducting the affairs of the company in a manner oppressive to him as 30 per cent shareholder.

Mr Gleeson is also facing a claim, also pending before the Commercial Court, by EMI-MR Investments LLC, of Delaware, USA, seeking judgment for €4.6 million arising out of two loans advanced to Mr Gleeson in 2016.

The loans were to fund the refinance/purchase of the Bottom of the Hill pub in Finglas and Gleesons pub of Mulhuddart and to enable him purchase shares and pay legacy trade creditors.