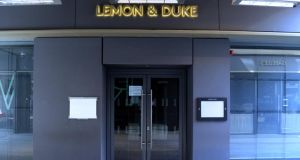 Insurer FBD’s reasons for not paying publicans’ business interruption claims caused by the Covid-19 pandemic are “plainly wrong” and “make no sense”, the Commercial Court has been told.

In important test cases, four publicans are challenging FBD Insurance Plc’s refusal to indemnify them and the insurer’s stance that its policies of insurance do not cover the disruption caused to businesses by Covid-19.

Opening the action, Michael Cush SC, representing three Dublin-based pubs, said FBD’s refusal to indemnify his clients for losses incurred due to the pandemic was on grounds the policies do not cover national or widespread outbreaks of a disease that result in the closure of a business.

FBD claims the policies cover only closure orders made following localised events, and that an event such as the pandemic was not covered. That interpretation, counsel said, was “clearly wrong”.

What FBD seemed to be saying was that “the more widespread the peril”, then the higher the likelihood that cover does not have to be provided.

Counsel told Mr Justice Denis McDonald that 1,100 Irish pubs and bars were affected by the dispute which arose after the insurer refused to provide them with cover since the pandemic resulted in the temporary closure of businesses in mid-March.

Counsel added the outcome of the case was relevant to many other businesses and insurers and not just publicans.

The focus of the test cases was the interpretation of the insurance policy and not the impact on the publican’s business or on the insurer’s business, he said.

The fourth action is by Leinster Overview Concepts Ltd, trading as Sean’s Bar, in Athlone, Co Westmeath. It is represented by Eoin McCullough SC.

The pubs claim, under their policies of insurance with FBD, they are entitled to have their consequential losses covered by “an insurable risk”.

They also claim the insurer is in breach of contract.

They claim the policies with FBD have a clause that states the pub owners will be indemnified if their premises are closed by order of the local or government authority if there are “outbreaks of contagious or infectious diseases on the premises or within 25 miles of same”.

That interpretation is disputed by FBD which, in April, informed the pub owners a pandemic did not fall within the scope of the clause.

FBD, represented by Declan McGrath SC, said the closures did not occur as a result of an outbreak of disease at the premises or areas where the pubs were located.

The closures occurred as a result of measures taken at a national level that involved a nationwide closure of business, it claims.

Mr Cush said the core issues in the cases included whether any cover had been triggered by the pandemic and, if so, what was the ambit of cover provided by the policies.

FBD’s position on such issues was “plainly wrong”, he said.

The insurer’s arguments against the claims were not supported by the contents of documents FBD gave to its customers in summarising what events were covered by the insurance policies and what were not, he said.

Counsel added his clients were relying on the English High Court’s decision in a case where that court was asked to determine if the pandemic should trigger pay-outs to holders of business interruption insurance policies.

That court ruled in favour of the UK’s Financial Conduct Authority (FCA) , which brought the case on behalf of the policyholders, on the majority of the key issues, counsel said.

In particular, the UK court ruled pay-outs were triggered under certain “non-damage” clauses that covered disease and denial of access to business premises.

That decision was under appeal to the UK’s Supreme Court, counsel said.

The hearing continues, and is expected to last several weeks.