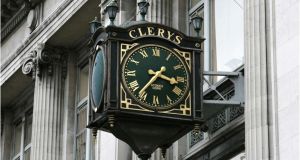 Clerys was sold to Natrium, a vehicle of D2 Private, and KPMG acted as financial adviser to D2 Private when Natrium purchased the OCS companies that owned and operated Clerys, the court was told.

Two former directors of the company which operated Dublin’s landmark Clerys store were “actively misled” into believing the retail business would continue as a going concern after its sale on June 12th, 2015, the High Court has been told.

Instead, the business was wound up hours later with the loss of more than 400 jobs.

Mr Justice Robert Haughton has directed the joint liquidators of OCS Operations Ltd to discover documents concerning seven meetings held by one of the liquidators, Eamonn Richardson of accountancy firm KPMG, with the new owner or their representatives in a period of six weeks before the Clerys sale and winding up.

Clerys was sold to Natrium, a vehicle of Dublin based investment firm D2 Private, and KPMG acted as financial adviser to D2 Private when Natrium purchased the OCS companies which owned and operated Clerys, the court was told.

On Tuesday, the judge agreed with Michael Cush SC, for the two directors, that the documents sought were necessary and relevant to their defence to the liquidators’ application for disqualification orders against them over their conduct of the affairs of OCS Operations Ltd, which operated Clerys for some years before its sale.

The disqualification application, under the Companies Act, will be heard on a later date. The directors – Rafael Klotz and Macolm MacLennan MacAulay – are professional directors and Mr Cush had said any disqualification or restriction order made against them here would have significant consequences for them.

Both directors deny unfitness or that they acted in breach of their duties as directors and say they acted honestly and responsibly in the conduct of the company’s affairs.

The judge noted their core defence to disqualification is that the true cause of the company’s insolvency was not their actions but a “pre-planned strategy” on the part of its new owners, of which the directors claim they had no prior knowledge, to have it wound up. They claim they got assurances from the purchaser that the company would continue as a going concern.

They claim the liquidation of Clerys must have been discussed at meetings in May and June 2015 and they are entitled to any documents concerning those meetings.

The joint liquidators – Mr Richardson and Kieran Wallace, both partners in KPMG – had opposed the discovery application on grounds that the documents sought were not relevant or necessary to the court’s assessment of the central issue – the directors’ conduct of the company’s affairs.

The liquidators also disputed claims by the directors of conflict of interest and lack of impartiality in their presentation, in the discovery application, of information concerning the Clerys sale.

Mr Cush argued that the liquidators had accepted the claims of Natrium/D2 Private that the decision to wind up Clerys had been taken on June 12th, 2015, the same day as the sale, when the directors believed the decision must have been made before then.

In his discovery ruling, the judge said the directors were not entitled to raise issues concerning the presentation of the liquidators’ application and he would refuse discovery on that ground. However, he was permitting discovery on the basis that the documents sought were relevant to the core defence to the disqualification application.

Bearing in mind that disqualification has been characterised as a “draconian” penalty, he said some of the matters canvassed in discovery may have a bearing on any penalty imposed, duration of any disqualification period and the court’s consideration of the alternative remedy of restriction.