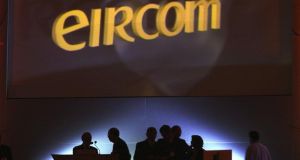 Revenue at telecoms company Eircom fell in the first quarter of its fiscal year, declining 3 per cent year-on-year to €313 million.

Revenue at telecoms company Eircom fell in the first quarter of its fiscal year, declining 3 per cent year-on-year to €313 million.

Operating costs were €199 million for the quarter to the end of September, down €3 million from the same quarter last year.

Ebitda (earnings before interest, tax, depreciation and amortisation) declined by 6 per cent or €7 million to €114 million.

“Our bottom line performance remains in line with expectations, following a decision to make commercial investments this quarter that will deliver long term growth.”

He said the company’s next generation fibre network passed the one million premises milestone during the quarter, and is course to deliver a fibre footprint of 1,600,000 premises by June 2016.

In the mobile segment, the company’s customer base returned to growth, increasing by 8,000 from the same quarter last year, and by 10,000 compared to the previous quarter, to reach a total base of 1,065,000.