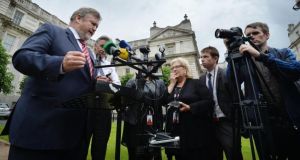 Minister for Health James Reilly has said he is confident challenges used by big tobacco in Australia – including heavy political lobbying, advertising and criticism of “nanny state” policies – can be resisted. Photograph: Alan Betson

Big tobacco has begun lobbying retailers on the impact of plain cigarette packaging on revenues, using advertisements in the trade press as well as on-the-ground reps.

According to a leading policy adviser on the cigarette packaging law in Australia, the first country to introduce it, this is just one aspect of a wider industry campaign being ramped up to “undermine” the measure.

Prof Mike Daube, who chaired the Australian expert advisory group on the issue, said tactics used by companies in Australia were likely to be adopted here due to fears of a “domino” legislative impact across the EU. “You [Ireland] can brace yourself for a massive lobbying and PR campaign and for claims that civilisation as we know it will end when plain packaging is implemented.”

The Convenience Stores and Newsagents Association (CSNA) said there had already been advertisements and approaches from reps advising of detrimental effects to income.

An advertising campaign in recent months – targeting publications such as Checkout, Shelf-Life and Retail News – has drawn attention to the threat of smuggled cigarettes.

“These are the real reasons why we should oppose plain packaging – because it will cause growth in the value market. It’s not doing anything to prevent [people] smoking,” Mr Jennings said.

The average difference between premium and value brands is €1.60.

There are 13,000 licensed retailers for tobacco products, 7,500 of which are bars and nightclubs. Tobacco accounts for up to 5 per cent of turnover for large stores; 16 to 20 per cent for “symbol” stores like Centra and Spar; 25 per cent for traditional newsagents; and 35 per cent for service stations.

Minister for Health James Reilly has said he is confident such challenges can be resisted.

Taoiseach Enda Kenny has been urged to abandon the plans by a consortium of US business lobbies.

Figures published in Australia this month showed the lowest level of tobacco sales since 1959, prompting claims the measure has worked. Big tobacco disagrees, saying its own statistics point to a rise in sales.

1 How much state pension will I get next year?
2 Oxford Covid vaccine trials offer hope for elderly
3 Mortgage drawdowns fall by almost a third
4 Where is the creative, effective advertising for face masks?
5 Ulster Bank to introduce new card payment controls on app
6 Hurrah for the companies giving staff more time off
7 Irish house prices could buck European trend and fall this year, says S&P
8 Stoneweg to develop 397-unit co-living scheme on Cork St
9 All you need to know in the Max Schrems-Facebook case
10 Sustainable investment: How your pension can help tackle climate change
Real news has value SUBSCRIBE