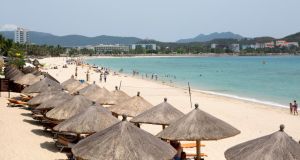 Sanya, Hainan: the past few years have seen major efforts to boost Hainan as a tourist destination. photograph: brent lewin/bloomberg

Also on Hainan island, not far from where Li Keqiang was speaking, authorities were announcing they would build the world’s largest duty free shop in a 60,000sq m (645,835sq ft) complex at Haitang Bay.

The past few years have seen major efforts to boost Hainan as a tourist destination, and duty-free shopping is a key component in those efforts.

The plan was announced by Hainan’s deputy governor Tan Li at the Boao forum. The shop will be relocated from the current duty-free shop, which is a mere 10,000sq m (107,639sq ft).

Ireland’s Aer Rianta International has been involved in duty-free Shops in China, constructing a facility at Kunming airport in south-west China.

China currently imposes heavy duties on luxury goods, which is one of the main reasons Chinese tourists are so drawn to duty-free havens such as Hong Kong. With China expected to become the largest luxury consumer market by 2015, the powers-that-be are keen to make sure

Hainan was granted special permission to run a duty-free programme from China’s cabinet, the State Council, in 2011, as part of efforts to give the island a lift as an international tourist destination. Travellers who leave the island by air are allowed to buy duty-free imported goods even if they do not leave the Chinese mainland.