Camelot hopes its number stack up 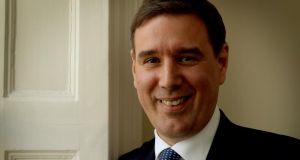 Psychologists refer to it as the sweet spot of risk-taking – minuscule investments which are too small to be considered financial risks. The classic example is lottery tickets.

How many times have you heard the phrase, “a harmless flutter that might just change your life”? It’s the business model upon which modern, mass-participation lotteries are built. It fuels a near-frenzied purchase of tickets every week and accounts for billions of euro in operator revenue each year.

For Alex Kovach, the manager director of UK operator Camelot, it can be a force for social good if channelled in the right direction. By this he means growing ticket sales to fund good causes.

To make his case, he proffers just one example, albeit a pretty striking one – the London Olympics. As chief sponsor, Camelot funded the event to the tune of £2.2 billion, the bulk of which went on building the Olympic stadium and adjoining village.

Doubtless, the group will want to showcase this success when it pitches for the Irish lottery licence later this year.

The company won’t confirm its entry into the upcoming competition for a new 20-year licence until it sees the tender, but this is mere protocol. It has had its eye on the Irish business for some time, viewing it as a perfect match for its UK operations.

Kovach was drafted into the Camelot team in 2010 as a sharp-shooter from the betting industry. As the former head of mobile and international operations at Ladbrokes, he’s a man who knows his way around the gaming sector.

He draws a distinction between the lottery business, a model based on a high volume of players placing small stakes, and the betting industry, which plies its trade from a considerably smaller cohort of high-spending, high-frequency punters.

“Lottery tickets are now a consumer good much akin to a can of coke or a packet of crisps – it’s really about mass participation and driving sales in a responsible way.”

In Britain, nearly 50 per cent of the population plays the lottery on a weekly basis, making it the sixth largest in the world. However, per capita, the spend is among the lowest in the world, underscoring the company’s claim to be a socially-responsible operator.

Camelot says the demographics of its lottery players roughly matches the UK’s population demographics, contrary to the traditional view that lotteries prey on poor people.

The group has operated the UK business since 1994. Back then, the competition for the licence was a straight-forward beauty contest between prospective operators.

Now there’s a new paradigm that’s trending in the US, Australia and Europe; one that involves the state seeking an upfront payment and/or a guaranteed stream of revenue for good causes in exchange for a long-term lease to operate the business.

The Irish Government has been clever to tap into this, says Kovach.

As he sees it, the best way of achieving “alignment between the operator, the government and the good causes” is through an upfront payment. “It ensures the operator is incentivised to grow the lottery to maximise revenues for good causes.”

But why should the Government surrender such a proven money-spinner to a private operator which will demand a big operator’s fee, perhaps up to €50 million a year in Ireland’s case?

“I think the private sector can apply and take risks in ways governments or state operators can’t, or at least find it difficult to.”

Kovach is keen to point to Camelot’s “proven track record of growing money for good causes”. Lottery sales in the UK have risen by 30 per cent in the last three years, despite the headwinds of recession. The group currently turns in £30 million a week for good causes, or £1.5 billion a year.

But what sort of upfront money will the State get for out-sourcing the business to a private operator?

A figure of €400 million has been bandied about since the process was announced, but valuing state lotteries in this way is a relatively new science which depends on a number of variables.

A key one is the 30.5 per cent of revenue for good causes which Minister for Public Expenditure and Reform Brendan Howlin had pledged last year to set down in the terms of the licence.

However, this week, his department announced good causes would receive an unspecified percentage of gross gambling revenues which discounts the cost of prize payouts, in a move which is likely to cause unease among lottery beneficiaries.

In the UK, Camelot returns to the state one of the highest percentages of turnover in the world; 28 per cent to good causes and a further 12 per cent to the UK exchequer.

Nonetheless, Kovach believes focusing on the percentage allocated for good causes is wrong. “What matters here is cash to good causes and cash to retailers.”

He says two prominent US lotteries, Texas and Indiana, recently reduced their prize payouts to protect the percentage of revenue to good causes and, in both instances, sales fell, along with the money for good causes.


US lotteries
Another example he uses to make his point is Ireland’s corporation tax rate, which is lower than that of most other European countries, but which delivers a similar proportion of overall tax revenue.

Camelot is owned by Ontario Teachers’ Pension Plan, one of the largest investment vehicles in Canada, which acquired it for £389 million in 2010.

While it does not operate any lotteries in the US yet, it serves as chief consultant in California and Massachusetts, which both recorded strong sales in 2012.

The group was recently awarded the contract to manage the Pennsylvania state lottery after a complex selection process, which involved Camelot guaranteeing the state $34 billion in profits over 20 years.

The process stalled, however, after the attorney general objected to the plan, claiming the state governor had “exceeded his authority” in granting the contract. It remains in limbo.

That aside, if Camelot were to come to Ireland, what would sort of lottery would it bring?

Kovach says developing a truly integrated multi-channel business is the company’s objective wherever it operates.

“Big jackpots and rollovers are what drive sales in the lottery business.”

Attracting greater player participation from the interactive space means bigger jackpots which feed back into more customers playing via retail, creating, what he calls, a “virtuous circle”.

“So it’s not online at the expense of retail.”


Digital space
Nonetheless, Camelot’s internet channel now accounts for 18 per cent of overall sales, making the largest internet lottery in the world, with a turnover of €1.2 billion.

It’s no wonder the company sees potential in the Irish operation, where online sales still only account for 2 per cent of the business, albeit because of regulations which date from the pre-internet era.

The rules governing online sales in Ireland have been overhauled in the new Lottery Act, which passed through both houses of the Oireachtas this week, in order to help the next incumbent grow the digital space and, presumably, help the Government woo potential bidders.

“Camelot views the interactive channel as an effective way to attract hard-to-reach and more valuable players. Our research shows that the younger market and more affluent market are more likely to play online rather than in retail,” Kovach says.

Last year, Camelot launched a mobile-optimised version of its website, making it easier for players to play draw-based games, check results and manage their accounts while on the move.

At the retail end, the company operates a fast-pay service in the UK, allowing players to store their numbers on a re-usable, wallet-sized card and play draw-based games at the checkout.

“If Camelot did decide to bid for the Irish lottery and was successful, you can expect us to bring this kind of fresh thinking to the Irish business.”

Camelot is not a technology company, Kovach says, “but we’re good at finding the best technology that allows for maximum flexibility at the lowest cost”.

Howlin has sounded a note of caution about the opening up of the digital channel and the risk it engenders in terms of player safeguards.

Camelot was last year named as the World Lottery Association’s most socially- responsible lottery, an accolade which Kovach says the company is very proud of.

“For the majority of people, playing lottery games is an occasional flutter, and we realise it is our responsibility to minimise any potential negative impacts through our responsible play measures.”

These include self-exclusion opportunities, strict age-verification systems and information about responsible gambling and sources of advice.

Kovach says the company uses game design protocols which assess whether a game has above-average appeal to vulnerable groups, namely those aged under 16, low-income groups and people with addictive tendencies.

If the results of these tools show that a game poses an above-average risk, he says, Camelot will either revise the product or review additional factors, such as its advertising and marketing strategy.

Regarding the 100-plus staff employed in the business here, Kovach says: “We’re focused on growth and so it’s not a cost-cutting exercise for us at all, and I think we would be employing more people as we grow that digital space.”

The company already enjoys an unusually high profile in Ireland, even though it doesn’t operate here, largely because of the BBC’s digital footprint. That’s unlikely to be a major factor in the Government’s deliberations, but it can’t hurt.