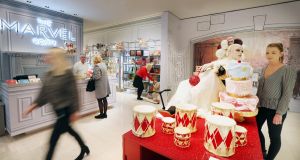 Brown Thomas managing director Stephen Sealey cites closure of BT2 outlets on Henry Street and Grafton Street, and a fall in sterling as reasons for the drop in revenue and profit.

Upmarket Irish fashion retailer Brown Thomas reported a decline in turnover and profit last year as a result of closing two small stores and the impact of the decline in sterling post-Brexit.

The company, which operates stores in Dublin, Limerick, Cork and Galway, made a pretax profit of €4.9 million compared with €15.6 million in the previous 12 months.

However, its figure for the previous year was flattered by a once-off gain of €9.4 million relating to a restructuring of its corporate entities here.

Speaking to The Irish Times, Brown Thomas managing director Stephen Sealey cited the closure of BT2 outlets on Henry Street and Grafton Street, and the impact of a decline in sterling as the reasons for the drop in revenue and profit. Like-for-like sales declined by 0.5 per cent.

“The year started well, then there was the uncertainty around the formation of government [here] so quarter two was so-so, and then we had Brexit,” he said. “Suddenly, overnight, all the stock in stores in the UK was 15 per cent cheaper if you were buying in euro and that remains our exposure to Brexit. It was people buying online or going cross-Border for beauty products.”

Mr Sealey said the Brexit impact has unwound somewhat as retail prices have risen in the UK. The business has hit its budget in the year to date, and profits are expected to rise, he added.

Mr Sealey said Dublin was “driving the strong growth” with its regional stores “a percentage point or so down on last year.

“Like every retailer, it’s all to play for over the Christmas shopping period,” he added. Brown Thomas will open its Christmas window in Grafton Street on Friday and is already trading from its seasonal Marvel Room gift shop in the store.

Online sales rose last year by 26 per cent and the company plans to launch a mobile app next year, incorporating its loyalty card.

While employee numbers rose by 3 per cent to 1,053 last year, its wage bill reduced by €1 million to €31.1 million due to reduced bonuses as a result of sales targets being missed.

Brown Thomas is part of the Selfridges Group controlled by businessman Galen Weston and his family.

Commenting on the Brown Thomas results on behalf of the Selfridges Group, its managing director, Paul Kelly, said: “Sustained investment in our Brown Thomas stores and in growing our digital channels limited the impact of the sharp fall in sterling last year. We are confident that our ongoing capital expenditure programme in-store and online will continue to deliver exceptional customer experiences and underpin our future performance.”

Brown Thomas paid a dividend of just under €5.1 million last year to its parent company, on a par with the previous year.